He was given the power to breathe into the image of the first beast, so that it could speak and cause all who refused to worship the image to be killed. He also compelled all, young and old, rich and poor, free and slave, to receive a mark in the right hand or in the forehead, because no one could buy or sell without the mark, which is the name of the beast or the number of its name. This calls for wisdom. If anyone has insight, let him calculate the number of the beast, for it is the number of man. Their number is 666. (Revelation 13:15-18)

20 years ago, when my family and I were forced to return to the United States after spending several years in the Philippines, we found a wonderful food market in California called “Whole Foods”.

It wasn’t perfect, as it still had tons of mass-produced staples, but it also had organic and other food options that were better options than the Big Box grocery stores. When we moved back to the US, whenever we had to travel we planned our routes so that we could stop at places that had a Whole Foods market, as we were not comfortable with cheap fast food restaurants.

But then Jeff Bezos bought Whole Foods and merged it with his Amazon.com platform. I stopped shopping at Whole Foods stores as often after that, because I knew that buying Amazon.com wasn’t going to make the chain any better. I had already stopped my online shopping from Amazon.com, due to privacy concerns and also because they had become the “Walmart” of the online marketplace, putting other e-commerce marketplaces out of business .

Indeed, as soon as Amazon bought Whole Foods, they gave up all their goals of offering more foods that did not contain genetically modified organisms (GMOs) in the future.

In 2020, I stopped shopping at Whole Foods altogether, because it was getting harder and harder to shop there without wearing a mask, and after being harassed one day for not wearing a mask, I stood in line to check out ho and I saw a sign that said they no longer accept cash payments due to COVID, and only credit cards.

And while Whole Foods started accepting cash again in its stores, it has rolled out several new features for the public to test, moving toward a goal of making all purchases strictly through its app, identifying and tracking everything you do in its app. stores, as they have for years online when you shop at Amazon.com. 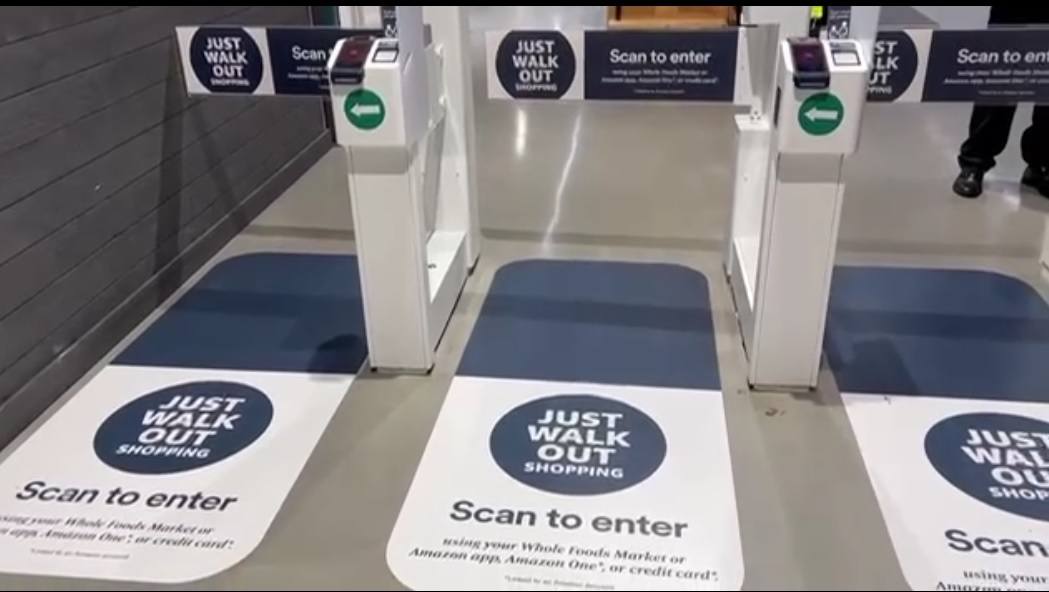 Earlier this year, Whole Foods launched its “Just Walk Out” shopping feature where you can scan a QR code linked to your Amazon.com account upon entering the store and then skip the checkout by scanning your QR code again when leaving the store.

Cameras throughout the store, along with Wifi signals, track everything you do, including scanning what products you put in your cart or take out.

This technology is currently being tested at a Whole Foods store in Washington DC and one in Los Angeles.

Here’s a video a Washington DC shopper posted online about her experience that’s making its way through the alternative media right now:

One thing that this person who shared this video seems to get wrong, is that one does not need a QR code (yet) to enter the store. You can see the “Pay at the Register” lane in the video, which is how you would enter one of these stores without a QR code. It’s still shift style as I’m sure they track how many people use their app and how many don’t.

I also looked up some recent videos that people made with the “auto pay” option, and apparently you can still use cash to pay, for now.

But when they finally have the technology to implement it nationally, they could very well eliminate the cash payment option, as they have done in the past.

Here’s Whole Foods’ press release about its Washington DC store, and here’s the link to Amazon.com describing the “Just Walk Out” shopping option, along with an FAQ.

QR codes, however, are already old technology as they can be easily hacked and rely on a smart device like your mobile phone, which is a problem if you run out of battery or lose your phone.

So Amazon.com has launched what will eventually replace the QR code, which is biometric hand scanning through Amazon One. This technology will likely quickly evolve to scan other parts of the body, such as the face and eyes. The technology to implant a chip in your body somewhere also already exists.

Here’s a recent Forbes article about Amazon One being used at Whole Foods:

After a cashier rang up my purchases at Whole Foods, I got my Amazon Prime member discounts and paid with my credit card. This doesn’t seem unusual, but what may come as a surprise is that I did it with just one hand scan. Holding my hand a few inches above an Amazon One scanner next to the cash register did it all. I don’t have to reach for a phone or wallet, and there’s no need to scan an app, swipe a credit card, or anything else—just a quick wave of the hand.

Not just for Amazon

Amazon may have created Amazon One for use in their own stores (Amazon Go, Amazon Fresh, Whole Foods, etc.), but they don’t stop there. Just as they turned cloud computing into a profitable service, Amazon is now offering One to other businesses.

The number of non-Amazon locations with the technology is small now, but it’s easy to see why retailers would adopt it to speed up checkout lines and increase customer convenience. (Full article.)

The Amazon One program is described here.

Hover to login and pay.

Once you’ve signed up, you can use the palm of your hand to sign in, identify and pay where Amazon One is available – it’s that simple! (Source.)

Can this technology be stopped?

Yes, we can stop this technology very easily. Just don’t use it! It really is that simple.

Decide right now that the conveniences of technology are not worth losing your freedom and allowing globalist technocrats access to every part of our personal lives so they can enslave us.

Any company that stops allowing cash payments, STOP shopping there and let them know why. You won’t even need the majority of the population to do this, just enough to create an economic incentive for competing stores to want your business and be willing to meet your demands.

This means the public must STOP shopping at Whole Foods and online at Amazon.com immediately. Support local businesses in your community, even if you have to pay a little more.

The globalists have been heavily invested in Amazon.com for decades, to the point that many years they operate at a loss, and they could even afford to sell all their products below cost, driving out the competition and still don’t get away with it business

Your local merchants can’t compete with this, but if you don’t support them, we’ll soon be out of options.