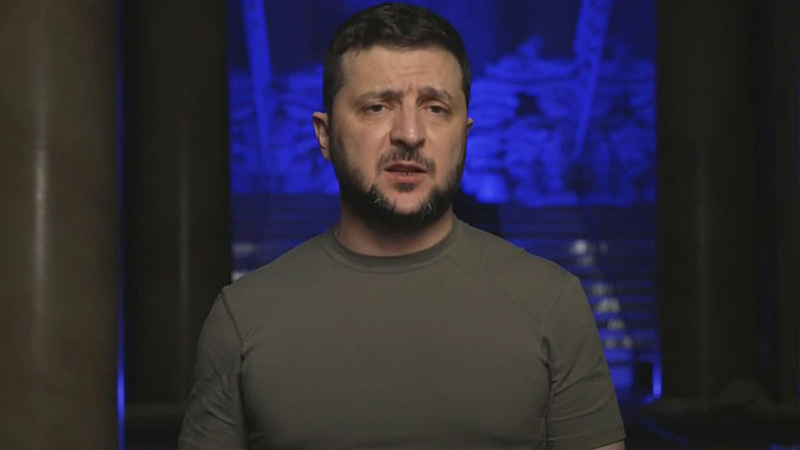 The Ukrainian president made a surprise appearance at the Grammys in Las Vegas, speaking via videolink to introduce John Legend, who sang a song for the war-ravaged country.

In a pre-recorded message, Volodymyr Zelensky told the assembled musicians to use their voices to demand an end to the war, stating: ‘Anything but silence’.

He said he ‘had a dream’ that those living in the cities of Ukraine could be as free as the performers on the Grammys stage, and likened the invasion to a deadly silence threatening to extinguish the dreams and lives of the Ukrainian people, including children.

‘Our musicians wear body armor instead of tuxedos. They sing to the wounded in hospitals, even to those who can’t hear them,’ he said.

‘But the music will break through anyway.’

The Recording Academy with partner Global Citizen had highlighted a social media campaign called ‘Stand Up For Ukraine’ to raise money during the ongoing humanitarian crisis.

‘Fill the silence with your music. Fill it today to tell our story. Tell the truth about the war on your social networks, on TV, support us in any way you can any, but not silence.

‘And then peace will come to all our cities,’ Zelensky said while wearing his now-trademark khaki t-shirt.

Legend, dressed in the blue of Ukraine’s flag, then performed his song ‘Free’, in a tribute to the war-torn country.