When Gov. Andrew Cuomo forced nursing homes to accept COVID positive patients, the results were deadly. Now we learn that Cuomo under-reported the real numbers by at least 50%.  It’s frightening to think that an elected official — whose primary duty is to protect the lives and welfare of the citizens they represent — would intentionally release COVID positive patients into a population of people most mortally vulnerable to the virus. You would think a lesson had been learned. So why is President Joe Biden catching and releasing COVID positive illegal immigrants across America?

During his first week in office, Biden issued an executive order authorizing “catch and release” programs and freezing deportations at the border. We now learn that illegal aliens they “catch” are not being tested for COVID-19 prior to “release.” Along with COVID-19, the Center for Disease Control has specifically cited the potential reintroducing of HIV, measles, pertussis, rubella, rabies, hepatitis A, influenza, tuberculosis, shigellosis and syphilis, scabies, chickenpox, pneumonia, mumps and a host of other diseases into our population.

“We can’t quarantine them,” Loaves and Fishes Director Bill Reagan told the Harlingen City Commission. “Even though they test positive, they’re going to leave the next day. They’re going to get on the bus or the airplane, and they’re gone.”

More than 5,700 unaccompanied illegal immigrant minors were apprehended at the border in January, the highest total for that month in recent years. The number of unaccompanied children in U.S. Border Patrol custody surpassed 3,700 for the month of February.

CBP shut down three checkpoints in Willcox, Arizona so personnel could be redirected to address a surge of migrants attempting to enter the United States illegally.

Hundreds of immigrant children are detained in rudimentary Border Patrol facilities beyond the three-day limit dictated by a 1997 court settlement. Unaccompanied minors are supposed to be transferred to longer-term housing facilities managed by the Department of Health and Human Services who are supposed to connect unaccompanied illegal immigrant minors with family, many of whom are also living in the United States illegally.

Last week, the Biden administration reopened the detention facility in Carrizo Springs, Texas, which is supposed to house up to 700 teens. Another detention center in Homestead, Florida – the one that was shut down in Aug. 2019 following reports of inhumane conditions and rampant sexual abuse — is also scheduled to reopen. Health and Human Services’ Office of Refugee Resettlement said additional soft-sided tents may be opened if necessary. But will any of that be enough? The flood is not subsiding.

CBS reported March 2 that the detention facility in Donna, TX — designed to house 250 migrants — was holding more than 1,800 people. Children staying there have complained of being hungry, being told they can only shower once a week, being denied phone calls to communicate with family members and saying the conditions are so overcrowded they have to take turns sleeping on the floor.

California Department of Justice’s Attorney General Xavier Becerra released a report in January. Aside from making clear the state’s immigration policy is little more than a feel-good, mismanaged, bureaucratic nightmare, it describes how their facilities are already overwhelmed by the flood of illegal immigrants, creating the “impossibility of maintaining social distance in a congregate setting” and place both “detainees and advocates” in “continuously challenged dangerous conditions” while “federal courts have ordered the release of some medically vulnerable detainees.”

But hey. At least they finally admit there are only two genders. 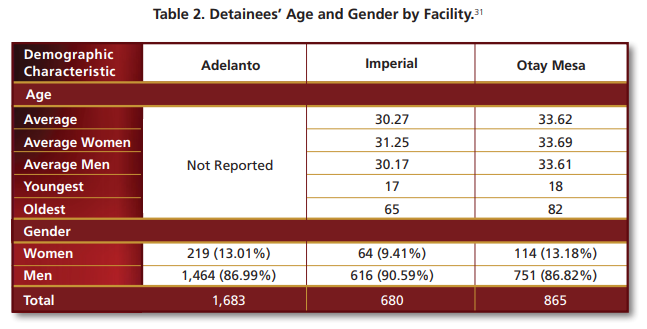