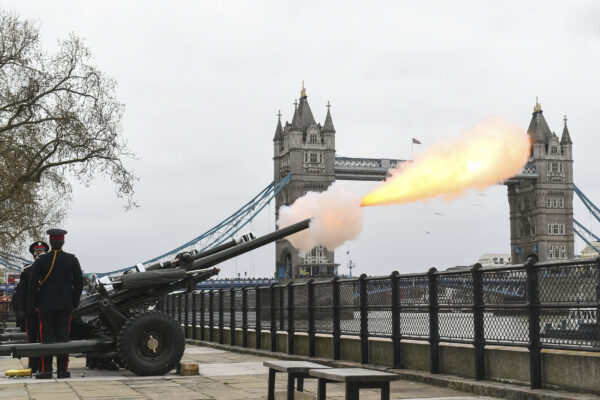 LONDON—Military teams across the U.K. and on ships at sea fired 41-gun salutes Saturday to mark the death of Prince Philip, honoring the former naval officer and husband of Queen Elizabeth II who they considered one of their own.

Batteries in London, Edinburgh, Cardiff, and Belfast—the capitals of the four nations that make up the United Kingdom—as well as other cities around the UK and the Mediterranean outpost of Gibraltar fired the volleys at one-minute intervals beginning at mid-day. Ships including HMS Montrose, a frigate patrolling the Persian Gulf, offered their own salutes.

Philip, who was also known as the Duke of Edinburgh, died Friday at Windsor Castle, two months before his 100th birthday.

“The Duke of Edinburgh served among us during the Second World War, and he remained devoted to the Royal Navy and the Armed Forces as a whole,” Gen. Nick Carter, chief of the defense staff, said in a statement. “A life well-lived. His Royal Highness leaves us with a legacy of indomitable spirit, steadfastness and an unshakable sense of duty.”

Members of the Commonwealth, a group of 54 countries headed by the monarch, were also invited to honor Philip. The Australian Defense Force began its salute at 5 p.m. local time outside Parliament House in Canberra, and New Zealand planned to offer its own tribute on Sunday.

Philip joined the Royal Navy as a cadet in 1939 and once had a promising military career. In 1941, he was honored for his service during the battle of Cape Matapan off the coast of Greece, when his control of searchlights aboard the HMS Valiant allowed the battleship to pinpoint enemy vessels in the dark. Philip rose to the rank of commander before he retired from active duty.

Two years after the war ended, Philip married Elizabeth at Westminster Abbey when she was 21 and he was 26. Philip’s naval career came to an abrupt end when King George VI died in 1952 and his wife became queen.

At the queen’s coronation in 1953, Philip swore to be his wife’s “liege man of life and limb” and settled into a life supporting the monarch. The couple had four children—Charles, the heir to the throne, Anne, Andrew, and Edward.

Before he retired from official duties in 2017, the prince carried out more than 22,000 solo public engagements and supported over 780 organizations, including the Duke of Edinburgh’s Award for young people.

Members of the public continued to honor Philip’s life of service on Saturday, leaving flowers outside Buckingham Palace and Windsor Castle despite appeals from authorities and the royal family to refrain from gathering because of the COVID-19 pandemic.