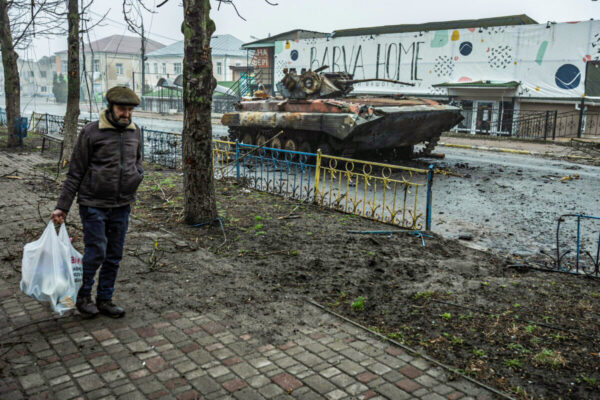 Ukrainian officials on Sunday claimed that Ukrainian civilians were massacred by Russian forces in the city of Bucha, located near Kyiv, as Western powers said they would ready more sanctions against Moscow.

The “Bucha massacre proves that Russian hatred towards Ukrainians is beyond anything Europe has seen since WWII,” said Ukraine Foreign Minister Dmytro Kuleba on Twitter as he posted photos of dead civilians that were allegedly targeted by Russian forces. The Epoch Times could not immediately verify the photos, while Russia has not issued a public comment on the allegations.

“The only way to stop this: help Ukraine kick Russians out as soon as possible. Partners know our needs. Tanks, combat aircraft, heavy air defense systems. Provide them NOW,” Kuleba wrote, adding that the “Bucha massacre was” a “deliberate” attack on civilians.

Meanwhile, the Mayor of Bucha, Anatoliy Fedoruk, showed a Reuters team on the ground two corpses who had their arms tied with cloth. Fedoruk also suggested that Chechen—not ethnically Russian—fighters were responsible for the alleged massacre as they controlled Bucha for the past month.

Ramzan Kadyrov, the head of Chechnya—a mostly Islamic region in Russia’s Caucasus region—confirmed that Chechen troops were sent to Ukraine after the Feb. 24 invasion started.

One corpse appeared to have his hands bound by the white cloth, and to have been shot in the mouth, according to Reuters, which did not upload or provide the photos. The news agency also said that it was “not immediately able to verify the mayor’s allegations.”

“Any war has some rules of engagement for civilians. The Russians have demonstrated that they were consciously killing civilians,” Fedoruk said.

Ukraine’s Ministry of Defense posted footage that allegedly showed dead civilians, including “some with hands tied behind their backs, their bodies scattered in the streets of the city.”

Previously, the Kremlin has denied allegations of war crimes in Ukraine, while pointing out that some Ukrainian nationalist factions have committed crimes and tortured Russian prisoners of war during the conflict. Human Rights Watch said last week that allegations of Russians being tortured or abused would be tantamount to war crimes.

Last month, Kremlin spokesman Dmitry Peskov told a conference call with reporters that “we categorically deny this” when questioned about allegations that Russian forces targeted civilian infrastructure with certain types of munitions.

“Shocked by haunting images of atrocities committed by Russian army in Kyiv liberated region,” wrote Charles Michel, the president of the European Council, on Twitter, adding that there is an effort underway “in gathering [the] necessary evidence for pursuit in international courts.”

“Further EU sanctions [and] support are on their way,” he said. It’s not clear what type of sanctions are being readied.

“War crimes. We cannot turn away from this horror,” Rep. Peter Meijer (R-Mich.) wrote on Twitter. “We cannot let those who perpetrated such unspeakable violence against civilians escape justice.”

Ukrainian officials on Saturday asserted that their forces took over areas around Kyiv, including Bucha, and had complete control of the region for the first time since Feb. 24. About a week before that, Russian Defense Ministry officials said Moscow would pull its forces from Kyiv and Chernihiv to focus on the Donbas area in eastern Ukraine.

Russia’s Ministry of Foreign Affairs hasn’t responded to a request for comment.

Jack Phillips is a breaking news reporter at The Epoch Times based in New York.