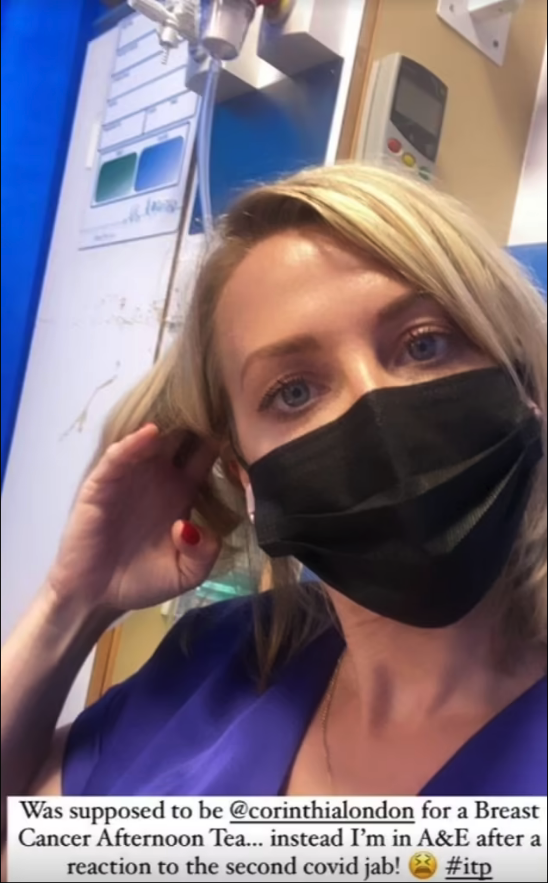 British TV host Laura Hamilton was rushed to the accident and emergency (A&E) room of a nearby hospital on Monday after suffering an adverse reaction to the second dose of the COVID-19 vaccine.

Known for hosting the UK television program “A Place In The Sun,” Hamilton posted a photo to Instagram announcing, “Was supposed to be @corinthialondon for a Breast Cancer Afternoon Tea… instead I’m in A&E after a reaction to the second covid jab!”

She wrote on Instagram that she went to the hospital after developing “a few blood spots after my second covid jab.”

Laura also said people reached out to her to ask if she suffered any other side effects.

“I had quite a few people reach out to me saying, ‘How were you after you had the injection? Did you have bruising and stuff?’ And it didn’t actually after I had the injection, but I did feel like I punched in my arm for like a week,” Hamilton explained.

Hamilton may have been lucky, as last month a popular UK radio host named Lisa Shaw passed away one week after receiving the covid vaccine.

CLICK HERE for dozens of articles about people dying shortly after taking the experimental shots.