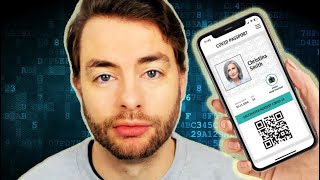 Privacy Watchdog group Big Brother Watch has warned that UK ‘Covid passports’ officially rolled out for international travel will eventually be used domestically to restrict the movement of the population, and that the small print even admits it.

The group tweeted that the privacy notice attached to the vaccine status feature of the NHS app says that the data will be used at ‘domestic events’:

Director of the campaign group Silkie Carlo outlined how the system is about much more than vaccines:

The group also warns that the vaccine status being added to the NHS app dovetails with a simultaneous massive data grab:

As we have extensively covered, plans to adapt a simple vaccine status app and use it domestically have always been in the works.

We are also told that the majority of British people are willing to accept the vaccine passports in order to engage in basic day to day activities, and that they are willing to go along with the digital ID card system PERMANENTLY.

Scientists advising the government have admitted (some regrettably) that a sustained campaign of ‘dystopian’ and ‘totalitarian’ fear tactics and ‘mind control’ has corralled the majority of the population into acceptance.

As we also previously reported, airlines plan to refrain from calling the imminent vaccine passports by that name because “It carries too many connotations,” according to one aviation CEO.

The EU is also already ensconced on the vaccine passport road, with a bloc wide ‘Digital Green Certificate’ system set to be rolled out in June.

Many other countries are also set to adopt the vaccine passport system, with scores of them, including America, trialling the technology in lockstep with big tech, mega-corporations and other globalist entities.