… Both were targets of the US government’s use of Twitter and social media to manipulate election results.

While today’s conservative headlines are filled with discussion of the Twitter revelations that US government officials are using to control and manipulate public opinion, it’s worth reminding everyone how this process first unfolded, and then watch how the intelligence community applied the lessons to the US in 2020.

The Obama administration first created the public-private partnership with Twitter and Facebook to support the “Arab Spring” uprising. As a result, Egyptian President Hosni Mubarak was the first elected official to be removed by former President Obama’s deployment of Twitter as a community activism tool for the revolution in 2011. Directly and consequentially, Egypt was the BETA test for an emerging process. a decade later in the United States during the 2020 election.

The use and influence of social media was a tool created by the Obama State Department, as Mic.Com pointed out years ago:

[…] In countries like Egypt, Tunisia and Yemen, growing action plans as protests formed by thousands, have been organized through social networks such as Facebook and Twitter. “We use Facebook to schedule the protests,” announced an Egyptian Arab Spring activist, “and [we use] Twitter to coordinateand YouTube to explain it to the world”. The role that technology has played in allowing the distribution of public information such as that claimed by the aforementioned activist, had been essential in establishing the democratic movement that has helped to guide the abused civilians to overthrow their oppressor.(link)

(NationalPulse) The most popular Twitter hashtags in the Arab region in the first three months of this year were “Egypt,” “January 25,” “Libya,” “Bahrain,” and “protest.”

Nearly 9 in 10 Egyptians and Tunisians surveyed in March said they used Facebook to organize protests or spread awareness about them. All but one of the protests called for on Facebook ended up coming to life on the streets.

These and other findings from the recently published second edition of the Dubai School of Government’s Arab Social Media Report lend empirical force to the conventional wisdom that Facebook and Twitter encouraged if not enabled the historic uprisings across the region from the beginning of 2011. (link)

Fast forward to 2020, and the same elements deployed against the Egyptian government were deployed in the United States in a coordinated public-private partnership with Twitter, Facebook, and social media.

The US government’s control over these social media platforms is ultimately what lies at the heart of the latest release of the Twitter Files.

In the Twitter file release, you’ll find Twitter’s chief censor, Yoel Roth, meeting with an official from the US Department of National Intelligence (DNI). From the testimony of FBI Special Agent Elvis Chan, we know that this officer was Shelby Pierson. Chan was speaking under oath in an ongoing First Amendment lawsuit against the Biden administration for manipulating and censoring speech on social media. 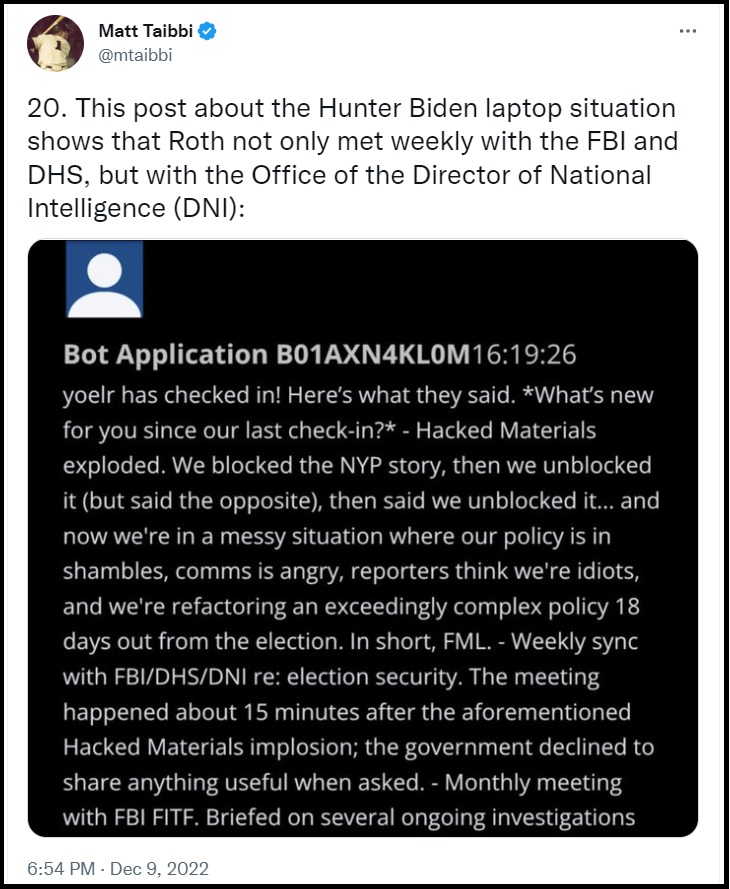 To see the connective tissue between what happened in 2011 (Egypt) and what happened a decade later in 2020 (USA), it is worth noting a discussion that took place in early 2020 between Shelby Pierson and former CIA Director Mike Morell.

Mike Morell was appointed CIA director after General Petraeus was fired in 2012 by DNI James Clapper at the behest of President Obama. In his new position, Mike Morell was the Obama official who testified to congress about CIA operations in/around the attack on the Libyan Benghazi compound on 9/11/11. Morell put himself in this position to protect Hillary Clinton and President Obama for the crisis they created in Libya, the covert arms sales in Libya, and ultimately the attack on Benghazi that stemmed from the efforts of the Department of State and the CIA to recover these illegal weapons.

During the 2016 presidential election between Hillary Clinton and Donald Trump, Mike Morell was a key voice that helped frame the narrative that Russia planned to interfere in the election. Morell, no longer in government and working for Clinton, was another vector in 2016 who planted the Trump-Russia narrative in the media while Fusion GPS and Christopher Steele worked outside sending various files to allies of the FBI to help fraudulent frame.

Mike Morell is a key Clinton/Obama loyalist and tool of the national security state. Morell is now a CBS intelligence analyst and contributor. 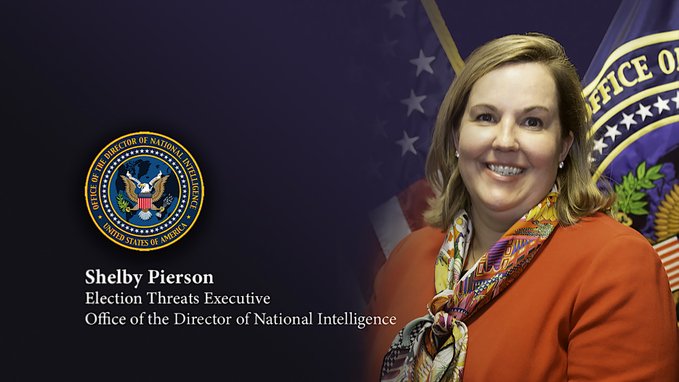 Come back Shelby Pierson…. In beginning of January 2020 Ms. Pierson and Mr. Morell were discussing the upcoming presidential election from the perspective of how the US intelligence community would be engaged. My emphasis:

(Via CBS) – In this episode of Intelligence Matters, host Michael Morell talks with Shelby Pierson, a career intelligence officer.recently named Intelligence Community Election Threat Executive within the Office of the Director of National Intelligence.

Pierson details the past, present and future election security threats facing the US and explains how The intelligence community has partnered with other government agencies to increase the visibility of foreign interference efforts.

It explains how the threat landscape has expanded since 2016, and tells Morell what new vectors foreign adversaries may consider using in 2020. Pierson also offers new insights into Russia’s systematic efforts to interfere in the 2016 and 2018 midterm elections. This is the latest installment of an ongoing series on “IC Leadership,” featuring senior leadership in the US intelligence community. (link)

Note that Shelby Pierson is the key officer in the ODNI office, speaking with FBI liaison Elvis Chan about frameworks for social media censorship and the government’s specific needs of USA in October 2020. At the same time, it is Shelby Pierson who coordinates with Twitter executive Yoel Roth.

I urge readers who read the full CBS transcript above to get a sense of Ms. Pierson from the context of her conversation with fellow traveler Mike Morell in January 2020.

Then, not by chance, we go to CTH archives from February 2020:

Well, what do you know… Suddenly today, anonymous intelligence officials are reporting to CNN that Ms. Pierson “overstepped” her position, was “deceptive” in her briefing and “misrepresented” the underlying intelligence. Imagine this.

The official, Shelby Pierson, told lawmakers on the House Intelligence Committee that Russia is interfering in the 2020 election with the goal of helping President Donald Trump get re-elected.

[…] “The intelligence doesn’t say that,” a senior national security official told CNN. “A more reasonable interpretation of intelligence is not that they have a preference, it’s a step below that.

The Office of the Director of National Intelligence, where Pierson is a senior official, did not respond to CNN’s request for comment. (month)

Why would Shelby Pierson and Joseph Maguire intentionally blindside the White House?

Obviously, the briefing was led by HPSCI Chairman Adam Schiff and Democrats on the House Intelligence Committee; and there was no information presented during the briefing to support the claims of Pierson, the Democrats and the media. (LINK 2020)

What you see emerging now is proof of the 2020 electoral manipulation framework from the DNI office. This government manipulation is later manifested in the public-private partnership between the US government and Twitter, as highlighted in the releases of the Twitter files.

A note of caution. I will draw attention to a very similar framework being implemented with the Twitter File releases that we saw in John Durham’s research. Notice how both Bari Weiss and Matt Taibbi call attention to Twitter executives, but do NOT call any attention to government officials. This does not seem to be a coincidence.

Bari Weiss could have easily identified the head of Twitter’s “strategic response team,” an intelligence official named Jeff Carlton. She didn’t. Similarly, Matt Taibbi may have identified the DNI office official in contact with Twitter executive Yoel Roth, an ODNI official. Shelby Pierson. He didn’t do it.

Just as John Durham structured his public investigative releases to cast the illegal shadow only on those outside of government, so Weiss and Taibbi are structuring their public reviews of the Twitter files to call out the attention only to non-government Twitter executives.

US government officials, who broadcast through the DHS portal on Twitter, are not being named or identified, why not?

From Taibbi and Weiss and Taibbi again, we’re getting an outline of the actions taken by Twitter officials, but we’re still blind to how information, requests, and demands get to Twitter from the US government and who specifically sends them. 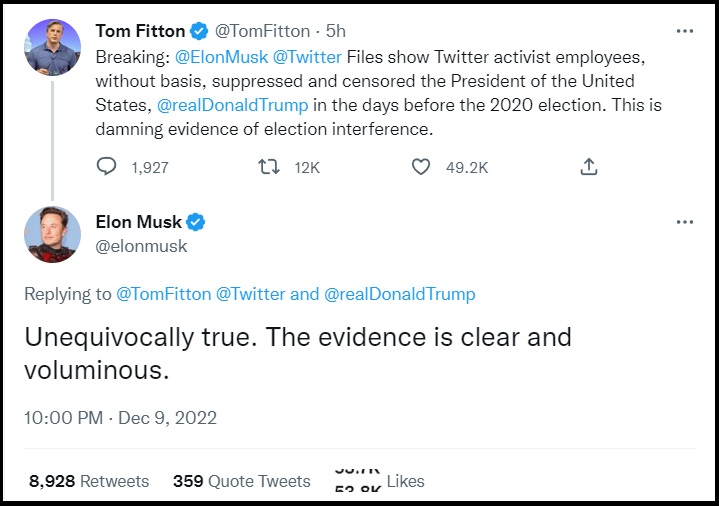