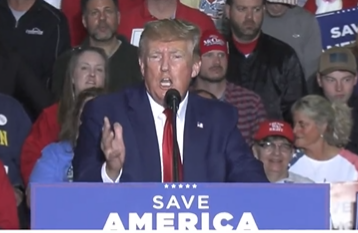 At a “Save America” rally held in Washington Township, Michigan on Saturday, President Donald Trump received a standing ovation as he touted his record of putting “America First” above all else.

Contrasting the recent policy failures of the current administration against his own achievements, Trump noted, “You had a president who not only completely rebuilt our military, including the addition of Space Force, […] but you also had a president who always put America first.”

The remarks were met with cheers and chants of “USA!” from the characteristically large crowd.

Trump has made a point of endorsing candidates that also support his “America First” agenda in the past. One such candidate, Michigan State Rep. Steve Carra, shared his thoughts on what he thinks the direction of the Republican Party should be in an exclusive interview with RSBN.

“We have too many weak Republicans who go along to get along,” Carra said. “And we need fighters who are going to stand up for the principles that we are elected to go there and represent.”