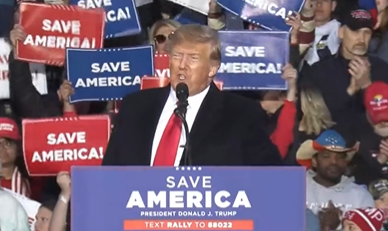 In addition to raising over half a million dollars, Ortagus’ campaign has over $550,000 cash on hand, according to a press release announcing the accomplishment.

“Our team is building momentum every day, as Middle Tennesseans make it clear they want their next Congressman to fight for our conservative values and President Trump’s America First agenda,” Ortagus said.

“I’ve never run for public office before, and I’m truly humbled by the outpouring of support we’ve received in the first two months of our campaign,” she added. “Together, we’re going to take back the Republican majority in the U.S. House of Representatives and fire Nancy Pelosi once and for all.”

Ortagus announced her congressional bid in February with support from President Trump.

“I am told the very strong and impressive Morgan Ortagus is exploring a run for Congress in Tennessee’s 5th Congressional District,” the 45th president said days before Ortagus’ announcement. “Morgan Ortagus will have my Complete and Total Endorsement if she decides to run!”

Despite the former State Department spokeswoman’s immense campaign success, Ortagus’ congressional race has been met with opposition as the Tennessee state legislature seeks to end her campaign.

According to the Daily Caller, SB 2616, which awaits Gov. Bill Lee’s signature, would disqualify Ortagus from running for office.

The bill demands that all congressional candidates live in the district they wish to represent for three years before seeking office. Ortagus reportedly moved to Nashville in 2021.

State Rep. Dave Wright, a sponsor of the bill, denies that the legislation targets Ortagus, who is favored to win the Republican primary after Trump’s endorsement.

However, the Ortagus campaign responded with a legal challenge. Additionally, the Daily Caller reported that three district voters filed a lawsuit requesting the federal court strike down the bill as unconstitutional.

Nonetheless, Ortagus is pushing back against the critics, maintaining she is more than ready to represent her community in Congress.

“President Trump didn’t question my residency when he endorsed me for this seat. He knew that I would be the best person to fight for Tennessee in Congress,” Ortagus said. “Whatever the outcome of this bill, I will continue to fight for my country, my state, and my community in any way that I can. I always have, and I always will.”