The new idol of the Christian right

Last Halloween (October 2022) Elon Musk proudly wore a satanic costume that featured the satanic Baphomet and the upside down cross.

Freemason Donald Trump has new competition among his loyal followers on the Christian right, as a new savior is being crowned in the conservative right-wing alternative media.

Elon Musk set out to save civilization when he bought Twitter. I meant it.

Civilization can only be saved through free and open communication and not behind walls built by elitists and totalitarians.

On Saturday, Elon Musk released the Twitter Files, Part 4 report about the company’s discussions about censorship and banning by US President Donald Trump. (Source.)

Elon Musk’s purchase of Twitter and the release of previously censored information against Trump and conservatives is no doubt being seen by the Christian Right as an “answer to prayer” as a new coalition of Christian pastors to help Donald Trump get re-elected.

The Pastors For Trump coalition was formed before 2024

President Trump has long ties to the evangelical Christian community, despite what the fake news media wants to say.

Pastors for Trump, is aimed at organizing Christians in the United States.

Lahmeyer is joined by Pastor Craig Hagin, who is co-pastor of Rhema Bible Church and director of operations for Kenneth Hagin Ministries, and Pastor Mark Burns, co-founder and CEO of NOW Television Network, a Christian television network based in South Carolina that reaches 11 million homes named by Time magazine as “Trump’s Shepherd”.

Hagin and Burns will serve on Trump’s Pastors Board of Directors. Pastor Lahmeyer had the following to say to this GP reporter.

“President Trump made it clear during his 2016 campaign for the presidency of the United States that he was committed to bringing Christian leaders into the fold.

During his historic first term, he proved that he would deliver on the promises he made. Looking ahead to 2024, it is now more important than ever to reaffirm the strength of the Christian faith and our willingness to support President Trump in his fight to return to the Oval Office,” Lahmeyer explained.

What could be crazier than a “pastor” who “gained recognition during his campaign to offer religious exemptions to help his fellow citizens escape the deadly COVID-19 vaccine” starting an organization of other “pastors” to put back in office the same man who funded the gene-altering traits of COVID-19 and then pressured the FDA to approve it?

I’m not sure there’s anything more dysfunctional than that, but if there is, call Elon Musk the “savior of civilization” and a supporter of “free and open communication and not behind walls built by elitists and totalitarians.”

Freemason Satanist Elon Musk could soon join forces with fellow Freemason Donald Trump and turn Twitter into the world’s biggest surveillance tool in the US, similar to China’s WeChat being used for social credit scores and Covid vaccine passports? 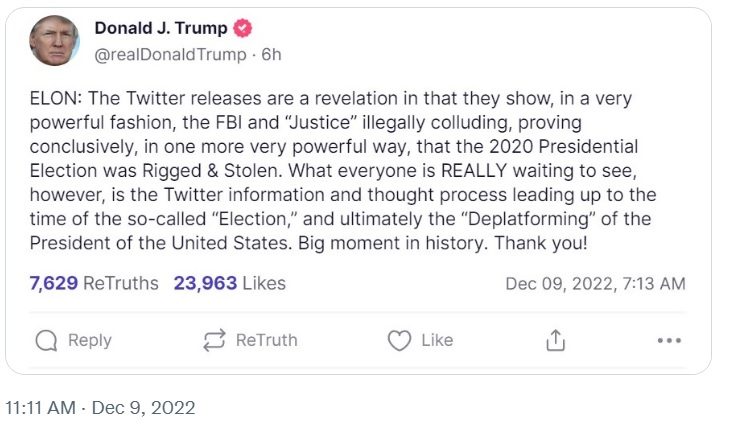 Meet Elon Musk, the billionaire technocrat who is the world’s richest man and the man who loves China’s model of society, and who is now partnering with the US military while covering our skies with the its satellites.

SpaceX is launching a new business called Starshield to support US military applications, building on the company’s existing satellite system.

“While Starlink is designed for commercial and consumer use, Starshield is designed for government use,” the company wrote on its website, “with an initial focus on three areas: Earth observation, communications and payloads housed”.

“Space X’s ongoing work with the Department of Defense and other partners demonstrates our ability to deliver capability in space and on the ground at scale,” the company said.

This 8 minute video I created is from our Bitchute channel, and will also be on our Odysee and Telegram channels.