The ‘Lighthouse in the Storm’ ⋆ Conservative Firing Line 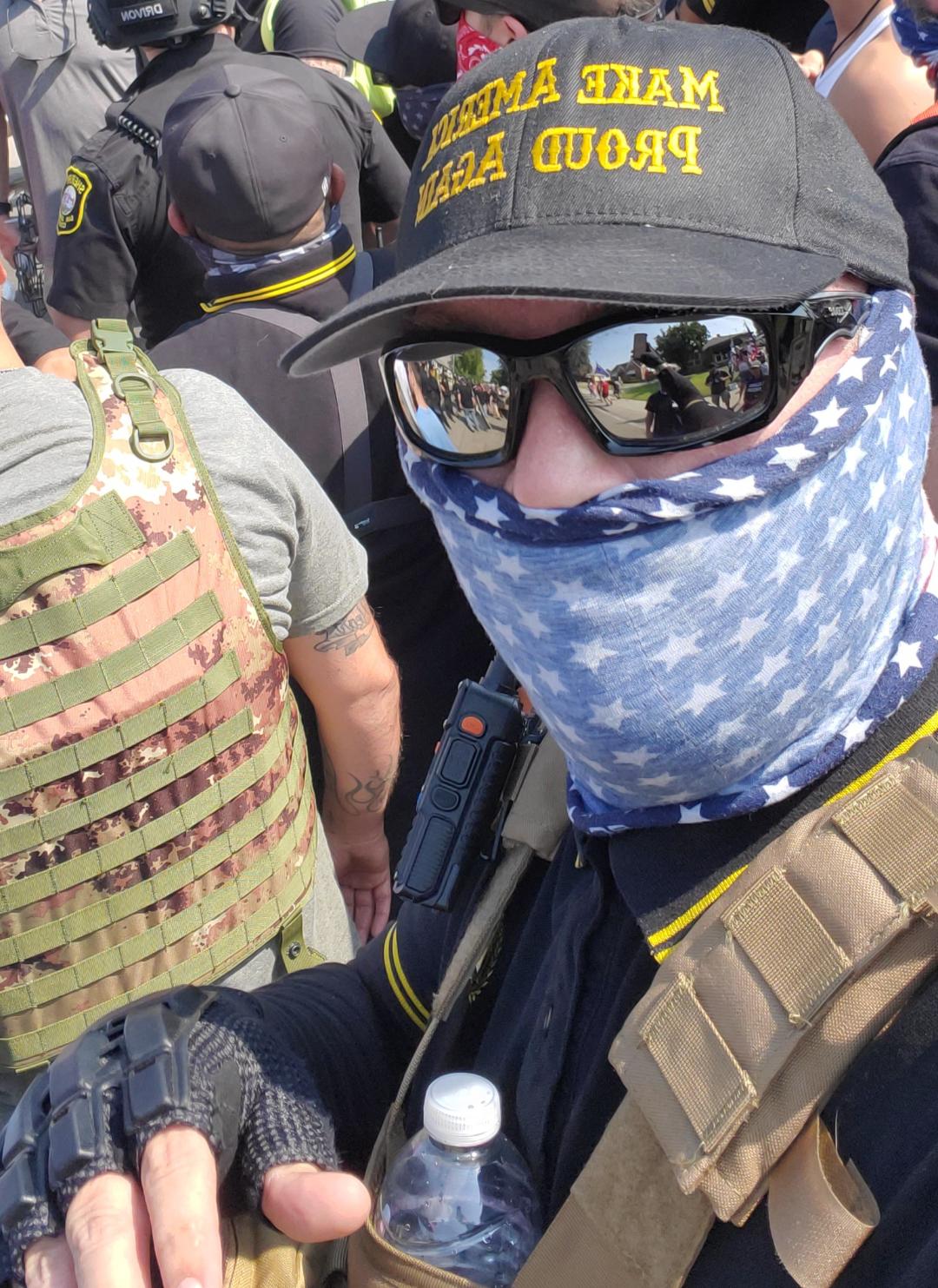 Like them or not, you’ve heard of them. The Proud Boys. Odds are, you’ve heard about them through members of the liberal media, who are hell-bent on casting them as a hate group whose members pose a very real danger to their very carefully re-woven fabric of our new “woke” society… and it’s true.

“For me, the Proud Boys are a gigantic fraternity of Alpha Males,” four-year member and president of the Fresno, CA Chapter of the Proud Boys “Mark Mozzarella” said.

Of course, that’s not his real name. He’s “proud.” He isn’t stupid. He knows the Proud Boys are being actively hunted by the Cancel Culture Army so he’s learning to make it harder for them to tie his name to his face.

The Tampa Free Press already reported how Fresno police officer Rick Fitzgerald was suspended from an 18-year, decorated career of devoted service to his community simply because of his past association with the Proud Boys and for being seen in the wrong place at the wrong time.

Despite the lack of actual evidence to prove their narrative, the liberal media is diligently trying to label the Proud Boys as the violent conspirators who actively planned and executed the riot at Capitol building on Jan. 6.

NPR’s Ryan Lucas tacked out a typical liberal propaganda hit piece saying they “charged toward the capitol by crossing over the barriers that had been violently disassembled and trampled by the crowd moments before.”

Never mind the actual video evidence of Capitol Police moving barricades out of the way and directing the crowd toward the Capitol building and posing for selfies with protesters who breached the building and vandalized offices and the legislative chambers.

Committee for Civil Rights Under Law president Kristen Clarke describes the Proud Boys as a “male-chauvinist group with ties to white nationalism.” The Southern Poverty Law Center has labeled them as a “hate group.” They even tried to convince people that the Federal Bureau of Investigation labeled the Proud Boys as a hate group but they were flat out lying to the public. A well-timed photo of a Proud Boy offering a blessing to a crown becomes evidence of a Nazi salute and the press dutifully preface the words “Proud Boys” in all of their reports with nefarious descriptives like “extremist group,” and “far-right militia.”

Sun Sentinel’s Ben Sales is even helping the effort of some lazy bigot in Florida to “rebrand the group as explicitly white supremacist and anti-Semitic” by giving him his 15 minutes of fame.

And why not? ANTIFA and Black Lives Matter have been hijacked by a bunch of angry, spoiled little white kids.

“They hold a lot of the same beliefs I do.” Mozzarella explained. “They are patriots. They believe in ‘family first’ and venerating the housewife. For me, they are the lighthouse in the storm. They are a support system that helps keep me grounded, and with the Lords’ help, we want to get this country grounded and return our country to a place where values, not insanity reigns.”

But the left continues to beat the drum. They need men to fear staying with or joining the Proud Boys and they need you to hate the Proud Boys as much as they do so you will approve of their vicious effort to eradicate them from society before you wake up and see how desperately the Proud Boys are trying to salvage the values the left is trying so diligently to destroy.

That’s the problem the left has with the Proud Boys. They are men, and proud of it. The Proud Boys embody everything the left has been trying to hard destroy when it comes to the traditional roles of men.

“Globally things are changing “women are turning into alpha-women,” uber-liberal wokester Shalini singh wrote for f-trend.com in 2020, “Now they are participating in contact sports, boxing, and basketball games, challenging the men’s dominance in different areas of lifestyle is forcing men to adopt with the changes.”

Very true, and in this confusing new gender-bending world, men are being allowed to say they are women so they can dominate them in contact sports like boxing where they can beat them up and literally crush their skulls for your entertainment and be celebrated as “the bravest athlete in history.”

“Are modern men re-defining men’s fashion trends and masculinity?” Shalini singh mused as he reflected on the new trend in menswear, which include things like “pink shirts, girly bags, bra tops, skirts, and camisole tops.”

“Are we ready for this trend?”

No. But, like with everything else the left wants, we are going to have it shoved down our throats and if we don’t swallow it whole or choke on it trying we are going to be attacked, maligned and ultimately destroyed.

Ironically, the Proud Boys even tried to support the LGBTQ community by adopting the kilt designed by an LGBTQ owned company as part of their uniform. But the left hated that. How dare they look manly in a skirt.

Mozzarella first learned of the Proud Boys back in 2017, when violent riots broke out at the University of California at Berkeley just because the young tolerant liberal students and their teachers didn’t like the idea of having conservative speakers like Milo Yiannopoulos, Ben Shapiro and Ann Coulter sharing their thoughts on campus.

“I saw a group of guys get together to start protecting these conservative speakers, which eventually turned into the Proud Boys fraternity,” Mozzarella explained. “I liked the fact that they didn’t take flack from anybody. They stood up against the left to defend someone’s first amendment rights of free speech.”

“For people to be rioting and burning buildings just because someone with an opposing viewpoint wanted to talk snapped me out of a daze,” “Mozzarella” shared. “There’s something very wrong with that. And when I found out the Proud Boys stood for the ideals of traditional values, I was in. Men should be men. That’s what’s wrong with a lot in society these days. Men are being told it’s wrong to be men and women are being trained to believe it’s wrong to want to assume the traditional roles of a housewife and mother. We’re slowly being walked away from our traditional American values. We’ve gone straight from Judeo-Christian values to hedonism.”

As Ben Shapiro wrote for National Review back in 2017:  “The Left’s dichotomous choice between emasculation and toxic masculinity leaves men out in the cold — and leaves them searching for meaning.”

Look at the Me Too movement.  It started in Hollywood, for crying out loud. While they want us to believe it’s all about women standing up to the horrid sexual male predators, it’s really about a bunch of little fame-hungry starlets who are nauseated by the knowledge that traded their bodies and dignity with some sweaty, fat, ugly guy for more important things like an Academy Award or coveted film roles. They all knew what Harvey Weinstein was like. They all knew what he wanted from them and they went anyway.

But that’s the new game for the left. Blame everything on men… especially white men.

In commercials, white men are increasingly shown to be idiots. We are pummeled with terms like “toxic masculinity” and taught that traditional attributes of manhood – strength, self-sufficiency and sexual virility – are dangerous characteristics, which will actually shorten a man’s lifespan.  Things like “risk taking” and “not being a feminist ally” are characteristics, which must be eradicated from the social construct.

“There’s a lost art for men knowing how to assume that traditional gender role,” Mozzarella said, “of taking care of his family and doing the things dads were doing back in the 1950s. Back then, kids were being raised traditionally by the mom, by a parent, as opposed to daycare, babysitters and school teachers.”

“The left has been systematically destroying the traditional family by implementing things that remove father figures from the household,” Mozzarella noted.

True. Bill Clinton’s 1994 Crime Bill launched a campaign where black men were arrested and incarcerated at such an alarming rate it all but destroyed the fabric of the black family and forced massive numbers of black women to become dependent on the government. Studies show that the rise in violent crime parallels the rise in families being abandoned by fathers. The straying from religion, the affectionate rearing of children by a mother and the stability provided by a father as an authority figure have had very real and measurable negative impact of society.

Children’s programming like Nickelodeon promote junk food and the idea that kids don’t need parents in the home. Classic Disney programming shows no parents or presents parental figures as being evil while more current programs toss in sex and gender issues and situations that promote alternative lifestyles and normalize the absence of traditional values in the home.

There was a time when children were taught to respect authority and the elderly. They were given chores, given boundaries, punished when they did wrong and expected to make good grades in school. Today’s children are disrespectful, foul-mouthed little brats who graduate high school and college as complete illiterates and continue living with their parents well into their 20s because they are incapable of holding down a job, cooking a meal or even folding their own clothes.

There was a time when parents made the decisions regarding physical and emotional well-being of their minor children. But these days, children are removed from the home at an early age so they can be set adrift in the liberal educational system where they are provided with abortions and life-altering drugs like puberty blockers in leu of an education and they do it without your notification or consent and they’re using your insurance to pay for it.

The Proud Boys want to return our country to its traditional family values. So, the Proud Boys need to be destroyed.

“It’s sad that those who desire homes with these traditional roles are condemned and ridiculed” Mozzarella lamented.

“If a woman has the right to choose to abort her child” Mozzarella proposed. “Why doesn’t she have the right to give birth to the child and raise it herself as opposed to going to work and having her child raised by other people?”