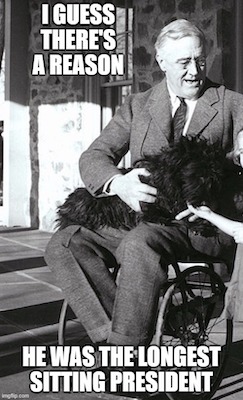 “Comrade Stalin, a fortune-teller came to see you!” “Execute him. If he was any good, he would have known not to come.”

Most people like to be told what to do. They want to be led. That makes sense, given the history of humanity. We work best when we work together, and the worst group is a group of a dozen people who each think they’re the leader. Because of this, hierarchy is a built-in feature to our operating system. Get a group of lumberjacks together, and one of them will want to be named the branch manager.

The downside of this “working together” is that the vast mass of people are willing to behave like lemmings and all jump off the cliff, as long as that’s what everyone else in the group is doing. Heck, lemmings would even jump off a dock, if they felt pier pressure. For me, the last few years has been the biggest revelation in human behavior and how easily people (especially NPCs) can be reprogrammed.

The three biggest reprogramming efforts in the last few years have been Trump, COVID, and Ukraine. I’ll skip Trump for the moment, and jump into COVID. Was the ‘Rona a real disease? Certainly. The reaction to it was overblown at every level. The average age of people who died from Corona-chan was (through my rough calculations) 73 in the United States. more here