The Astonishing Chapel of Germanic Kings 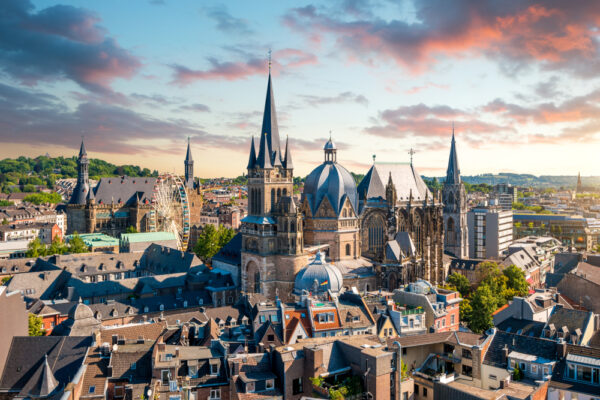 From 795 to 843, Aachen, in western Germany, was the capital of the barbarian kingdom of Francia, also known as the Kingdom of the Franks. The Franks were Germanic people who ruled large parts of Western Europe from late antiquity to the early Middle Ages.

In the late eighth century, the king of the Franks and king of the Lombards—Charlemagne—commissioned a palace chapel to be built in Aachen. (Charlemagne, also known as Charles the Great, went on to become the Holy Roman Emperor in 800.)

The chapel embraces the classical and Byzantine traditions and was the first vaulted structure north of the Alps since antiquity. It inspired religious architecture from the Carolingian until the early medieval period.

Constructed between 793 and 813, the octagonal Palatine Chapel features two stories, the lower of which has eight pillars supporting arches, and the upper story is adorned with eight Carolingian bronze gates.

Originally, the chapel dome featured a magnificent mosaic of Christ enthroned and surrounded by the Elders of the Apocalypse, but today’s mosaic dates from around 1880.

Aachen Cathedral had many architectural additions over the centuries of the Middle Ages, and all differ distinctively from the original Palatine Chapel. The Gothic Choir is one example.

Facing the altar, the German kings of the Holy Roman Empire sat on the Carolingian stone coronation throne from the Middle Ages until 1531.

The cathedral’s treasury houses some of the most significant ecclesiastical treasures of northern Europe, including a 14th-century gold and silver idealized reliquary bust of Charlemagne donated to the cathedral by Charles IV.