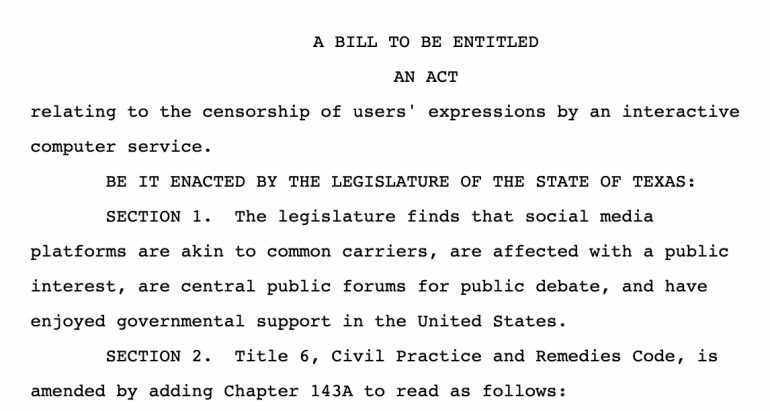 Patiently waiting for DC to get themselves sorted out isn’t the only option on the table for citizens wanting their voices heard in the national conversation.

Censorship tilted the results of the last election. Polls tell us that knowledge suppressed in several key stories actively throttled by Big Tech would have — had Biden voters known about it — flipped enough votes in enough key states to have given Trump a second term.

A little more than two years ago, Cambridge Analytica was scapegoated as an example of ‘election interference’ for much less.

From Trump’s 2016 win and onward, Big Tech has been actively making their platforms more hostile to conservative use, culminating in the coordinated purge of Trump from all digital speaking, sales, or email in January of 2021.

We have had hearings over conservative censorship for years now, and are no closer to a resolution.

Texas is tired of waiting and is taking action at the State level to protect their citizens and give them recourse if they have been the targets of viewpoint discrimination.

This new bill would allow any Texan who believes they have been canceled, censored or de-platformed to file a lawsuit against companies like Twitter and Facebook. But would this hold up in court?

“Big tech’s efforts to silence conservative viewpoints is un-American, un-Texan, unacceptable and pretty soon, it’s going to be against the law in the state of Texas,” Abbott said.

Abbott and Hughes said they believe social media has become the modern-day public square, and Texans should be free to express and exchange their views on online platforms without the risk of censorship.

The legislation is Texas Senate Bill 12, and it was introduced by District One state Senator Bryan Hughes.

If this holds up in court, that could be a game-changer, exposing tech companies to legal ramifications of censorship.