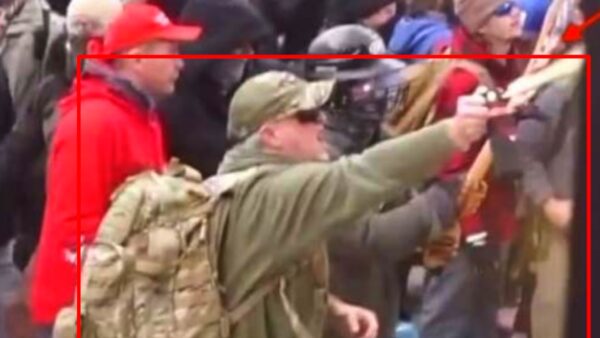 A North Texas man accused of spraying chemicals at over a dozen police officers outside the U.S. Capitol in Washington D.C. earlier this year will remain in custody until his trial, according to a report.

Denton County resident Daniel Ray Caldwell, 49, a former U.S. Marine, was arrested by FBI agents on Feb. 10 for his alleged participation in the Jan. 6 incident.

He was charged with multiple offenses including assault on a federal officer, trespassing on restricted grounds, violent entry on those grounds, and participating in civil disorder.

A federal judge at the U.S. District Court for the Eastern District of Texas ruled on March 5 Caldwell will stay behind bars until his trial in Washington, D.C., The Dallas Morning News reported.

In a statement of facts (pdf) filed in the U.S. District Court in Washington, FBI special agent Seth Webb said Caldwell was seen in a video on Jan. 27 while wearing a green hoodie, dark glasses, a camouflage hat, camouflage assault pack, and camouflage trousers among a crowd of protesters.

In one of the videos, which were posted to Twitter and Youtube and later obtained by law enforcement officials, Caldwell is seen “spraying a mist at police” who were trying to stop the protesters from reaching the Capitol building.

The criminal complaint reads that Caldwell was seen in a second video recorded at the Renaissance Hotel on South Potomac Avenue in Arlington, Virginia after the protest where he talked to females off-camera about the events that occurred earlier in the day.

Caldwell was wearing the same outfit as during the protest in that second video published by ProPublica as he described the events outside the Capitol, answering questions from the unidentified females.

“I believe 10 minutes after we started the storming, a big fight broke out and the guns go off and one girl got hit in the neck,” Caldwell said during the interview. The female, as well as Caldwell himself, were both struck by rubber bullets fired by police during the incident, he claims.

He continues to explain that once the fight started, somebody took the female struck in the neck, and then “took off.” Others, including Caldwell, stayed outside the Capitol as police were spraying mace towards him.

The complaint noted that Caldwell warned police officers before spraying himself that if they continued spraying, he would return the spray.

“According to Caldwell, once the officers sprayed him, Caldwell sprayed toward police officers and believed he sprayed around 15 officers,” special agent Webb said in the statement of facts.  “Caldwell stated that officers then shot him with a big cannon with rubber bullets.”

On Feb. 4, the FBI interviewed a witness who claimed Caldwell previously participated in Airsoft Military Simulation (MilSim)—”a live-action, in person simulation of armed conflict scenarios conducted by civilians that involve airsoft plastic projectiles launched be replica weapons, but do not involve actual firearms”—and would bring a real firearm to the course and had to be corrected and asked to return the firearm to his vehicle, the documents state.

The U.S. Department of Justice announced in late February more than 300 protesters accused of participating in the Jan. 6 incident have been charged.