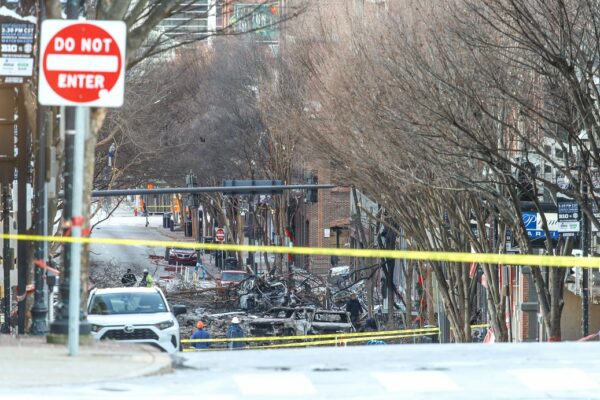 A Tennessee box truck driver has been charged following reports that his vehicle was playing audio similar to what was heard before a recreational vehicle exploded in downtown Nashville in the early hours of Christmas Day, officials said.

Fortunately, no explosive device was found in the vehicle.

James Turgeon, 33, of Holly Grove Road near Murfreesboro, Tennessee, has since been charged with two counts of felony filing a false report and one count of tampering with evidence, according to a statement released by Rutherford County Sheriff’s Office late Sunday.

According to officials, Turgeon was playing the audio “loudly” outside the Crossroads Market in Walter Hill, before a section of highway in neighboring Wilson County was shut down by law enforcement officials to allow a robot to be sent out to investigate. Five homes in the area were also evacuated as a precaution, The Tennessean reported.

“During the course of the investigation, it was revealed Turgeon made a similar announcement at Kings Chapel Independent Missionary Baptist Church at Jefferson Pike and Dunaway Chapel Road while church was in service,” Craig said.

The 33-year-old left the parking lot and was subsequently pulled over by authorities and detained, officials said.

Turgeon allegedly intentionally damaged the speaker system wiring of the box truck, which resulted in the charge for tampering with evidence, authorities said.

Turgeon is being held at Rutherford County Adult Detention Center on $500,000 bond, with a hearing scheduled for June 7 in General Sessions Court.

In the Nashville incident on Christmas Day, Anthony Quinn Warner, 63, parked a motorhome in front of the AT&T network center on Second Avenue.

Several hours later, at around 5 a.m., several loud bangs, recognized by locals as gunshots, were heard. Some 5 to 15 minutes later, there were more gunshots, prompting people to call 911. Around 5:30 a.m., a recorded message began blasting from the recreational vehicle, warning that vehicle was going to explode.

A 15-minute countdown followed and then, a massive, fiery explosion.

Human tissue found at the blast scene confirmed Warner’s identity, FBI Memphis announced on Dec. 27, and U.S. Attorney for the Middle District of Tennessee Don Cochran said he died there.

There is currently no clear indication of what may have motivated the attack.

Petr Svab contributed to this report.