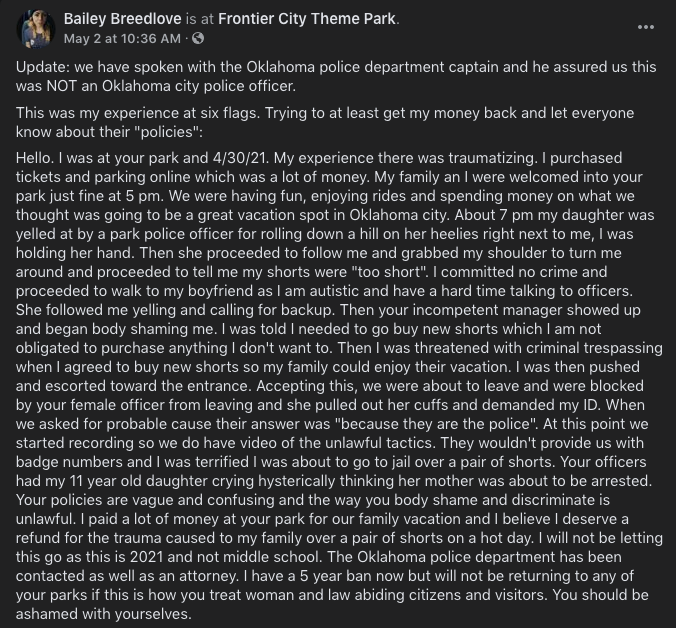 Two women are going viral online after sharing similar stories about being kicked out of Six Flags theme parks for wearing shorts deemed “too short” by staff.

One woman, an autistic mother visiting Six Flags’ Frontier City in Oklahoma City with her daughter last month, is seen pleading with a police officer in a video shared to TikTok.

The park police were trying to issue the mother a criminal trespassing ticket despite her stating she would leave the property.

“I’m an officer. Once we ask for ID you have to identify yourself,” an officer falsely told the mother.

“I was leaving,” the mother answered. “Look at this, look at what you’re doing to my daughter,” she added as her daughter started to cry.

“Identify yourself and you can leave,” the officer told the mother.

Under duress, the mom replied, “I’m Bailey Breedlove,” before reluctantly handing over her ID.

Describing the incident in a Facebook post, Breedlove said Oklahoma police confirmed the individual wearing a “police” shirt in the video is not an Oklahoma City officer.

The park officer allegedly grabbed Breedlove by her shoulders before telling her the shorts were “too short.”

Then, a park manager showed up and started to “body shame” her before asking the mother to purchase new shorts at a Six Flags shop.

“I was told I needed to go buy new shorts which I am not obligated to purchase anything I don’t want to,” she wrote. “Then I was threatened with criminal trespassing when I agreed to buy new shorts so my family could enjoy their vacation. I was then pushed and escorted toward the entrance.”

At this point, the officer blocked the family from leaving the park and asked for Bailey’s ID, as seen in the video.

“I have a 5 year ban now but will not be returning to any of your parks if this is how you treat woman and law abiding citizens and visitors. You should be ashamed with yourselves,” she concluded.

See the shorts in question below:

Bailey provided another rundown of the situation in the following video.

“I was sexually harassed by their staff today,” Kayla Davison began. “I got stopped at the gate at the entrance and the security guard said, ‘Oh, your shorts are too short. You can’t enter the park.’”

Park security said her friends could enter the park and buy her new shorts or that she could go get another pair somewhere else.

“They then proceeded to bring over three other security guards to look at my ass to determine whether or not I could enter the park,” Kayla added.

In an amusing turn of events, Kayla said one of her friends agreed to enter the park and purchase a new pair of shorts that ended up being even shorter than the pair she was wearing at the time.

“I looked at a lady in the eyes and said, ‘I will put these on, but my ass is fully going to show in these.’”

“So, she called her supervisor over, which was one of the three who was like, ‘Oh, turn around for me so I can stare at your ass to determine if you can go in or not,’” Davison facetiously stated.

After telling employees that making her show her backside to enter the park was sexual harassment, a security guard allegedly threatened to issue Davison a ticket for the attire.

Kayla also noted that there is a water park at that specific Six Flags location where women walked around in bikinis, which are much more revealing than what she had on.

She continued, “So, finally the manager or security guard or whatever tells me to turn around again, looks at my ass some more, and then is like, ‘You know what? You’re fine just go.’”

Paul Joseph Watson of http://summit.news guest hosts The Alex Jones Show to break down the out-of-control medical tyranny of the authoritarian left.