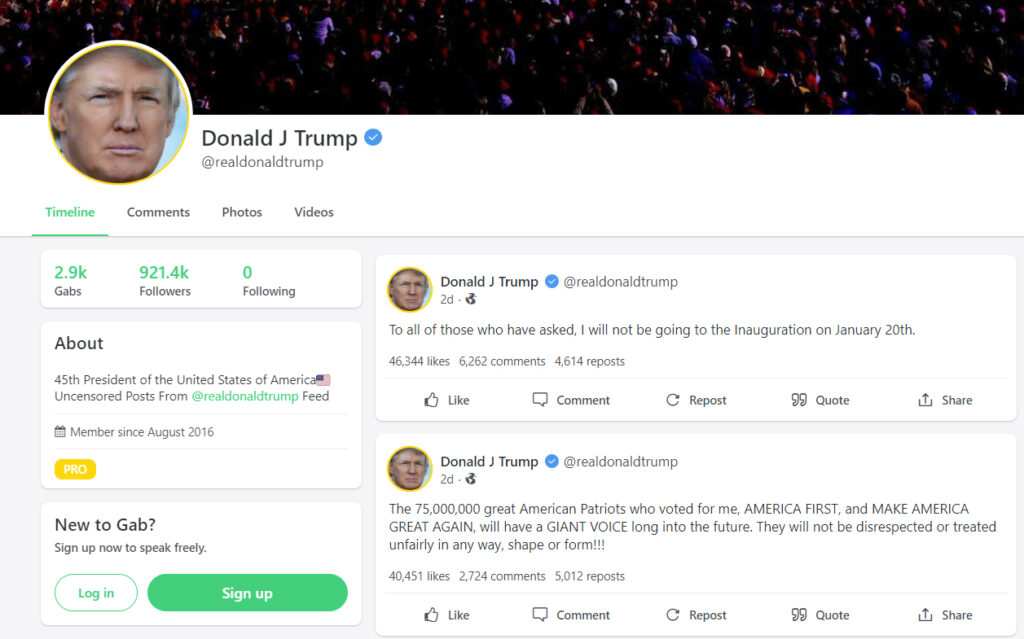 President Donald Trump is the latest victim of Big Tech censorship, but one company saw the writing on the wall and managed to back up his Tweets prior to the purge.

After the president was banned by Twitter last week, word quickly spread that his tweets still lived on an independent, alternative social media site called Gab.

Under the profile @realDonaldTrump, the president’s now-deleted 2.9k tweets were mirrored and have been archived for posterity, countering Twitter CEO Jack Dorsey’s efforts to silence Trump.

In recent days, Gab has exploded in traffic and new user sign-ups following Twitter’s massive purge of pro-Trump accounts and Amazon’s takedown of its competitor Parler.

President Trump was also rumored to be considering the platform for his new online megaphone, but the idea was reportedly quashed by senior adviser and son-in-law Jared Kushner.

More on Kushner’s Gab-block from Bloomberg:

Kushner told other White House officials including Trump’s director of personnel, John McEntee, that the president’s social media presence should not migrate to the fringe sites. Trump could have overruled him and moved to the new sites himself, but with Scavino’s discouragement he did not, the people said.

Advisers were possibly worried about optics, as the media quickly blamed Gab for helping extremists organize the Capitol breach, a rumor the company has pushed back against.

Instead, Gab has highlighted reports alleging Facebook and Twitter were the platforms largely used by protesters in the days ahead of the Capitol breach.

As of writing, Gab’s infrastructure is buckling under the strain of millions of new visitors checking the site out and attempting to establish new accounts, in addition to cyber attacks aimed at disabling the site.

“Gab is growing rapidly in a historic exodus from Big Tech, and fending off sophisticated attacks that seek to silence and censor your ability to Speak Freely,” a message at the site currently reads.

Meanwhile, Twitter’s market value has plunged over $5 billion since banning President Trump last week, with investors worried the platform – now devoid of its main attraction – will no longer interest users.