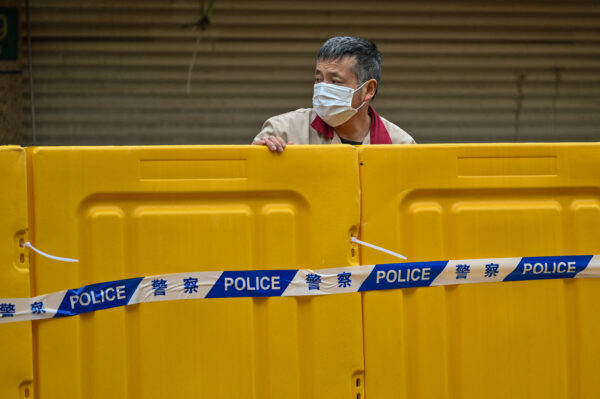 Shanghai officials have insisted on continuing a strict “zero-COVID” policy after announcing that over 25 million residents have been tested for COVID-19, with no sign that the city’s lockdown will be lifted soon.

As of 8 a.m. local time on April 5, health officials in Shanghai said that the city’s 25.66 million residents had taken a mandated nucleic acid test, according to the municipal authority’s official account on China’s Twitter-like Weibo. The mass testing began on April 4, targeting the city’s entire population.

Hours later, another announcement on Weibo stated that the city’s health workers would visit the homes of those whose nucleic acid test samples had abnormal results. Residents in these households would be required to take another test.

Additionally, it was also announced that the city will speed up the process to isolate those confirmed to have contracted the CCP (Chinese Communist Party) virus.

One of those currently under quarantine is Liu Zhimin (a pseudonym), a resident in eastern Shanghai’s Pudong district. In an interview with The Epoch Times on April 5, Liu said he was sent to his current location—a local makeshift quarantine center that was originally a school dormitory—at around 3 a.m. on April 3. He said he had close contact with an infected coworker.

He added that he was staying in a three-bedroom dorm with 15 other individuals, including both women and men. He was displeased that the room did not have heating.

Liu had other complaints. He said the place’s supply of food, electricity, and hot water had not been stable. On April 3, he said he had his first meal of the day at around 4 p.m. local time.

For over a month now, Shanghai has been hard hit by the spread of the Omicron variant of the coronavirus. The spike in infection cases prompted Shanghai officials to begin enforcing a two-stage lockdown on March 28, with those living in eastern and southern districts undergoing a four-day lockdown ending on April 1, to be followed by those living in western districts for the next four days. The separate lockdowns have since been extended until further notice.

Gu also said there were 13,354 new infection cases for the previous 24 hours, bringing the city’s total since March to over 73,000.

The infection numbers reported by Chinese authorities should be treated with caution. Since the CCP virus was first reported in central China’s Wuhan city in late 2019, experts and Chinese residents have repeatedly argued that Chinese officials were underreporting infection and death figures.

The Shanghai lockdown has led to widespread discontent among locals, who’ve complained about a shortage of food and medicine, lacking access to medical treatment for non-COVID-19 diseases, and children being forcibly taken away for quarantine.

Despite mounting public outrage, the communist regime has not shown any sign of abandoning its “zero-COVID” policy, where officials go after every single virus case in the hope of eliminating the virus altogether. On April 4, Sun Chunlan, one of the Chinese regime’s vice premiers, said in Shanghai that achieving the “zero [COVID-19] target” should be realized “in the shortest time possible,” according to China’s state-run media.

Sun also said it was important that every resident was tested for coronavirus.

The Chinese regime has deployed armed police in Shanghai, Radio Free Asia (RFA) reported on April 4, a sign that Beijing is worried that public anger could lead to social unrest.

In China, the armed police force is a paramilitary force that reports directly to the Central Military Commission, the regime’s top military body.

“The armed police came on March 28 and 29, and there are a lot of armed police around right now,” a Shanghai resident with the surname Feng told RFA. “They had been keeping a low profile, but they are much more open since Vice Premier Sun Chunlan arrived here.”

Zhang Jin, an academic who lives in western Shanghai’s Puxi area, told RFA that armed police were patrolling the gates of his residential community.

“There are special police with guns stationed at the gates of our community, because the older people on the neighborhood committee can’t keep control of the situation,” Zhang said.

Zhang added, “They’re afraid there’ll be some kind of incident in Shanghai, which would be a big deal, so they’ve been brought in to keep order.”

Gu Qinger and Gu Xiaohua contributed to this report.

Frank Fang is a Taiwan-based journalist. He covers news in China and Taiwan. He holds a master’s degree in materials science from Tsinghua University in Taiwan.