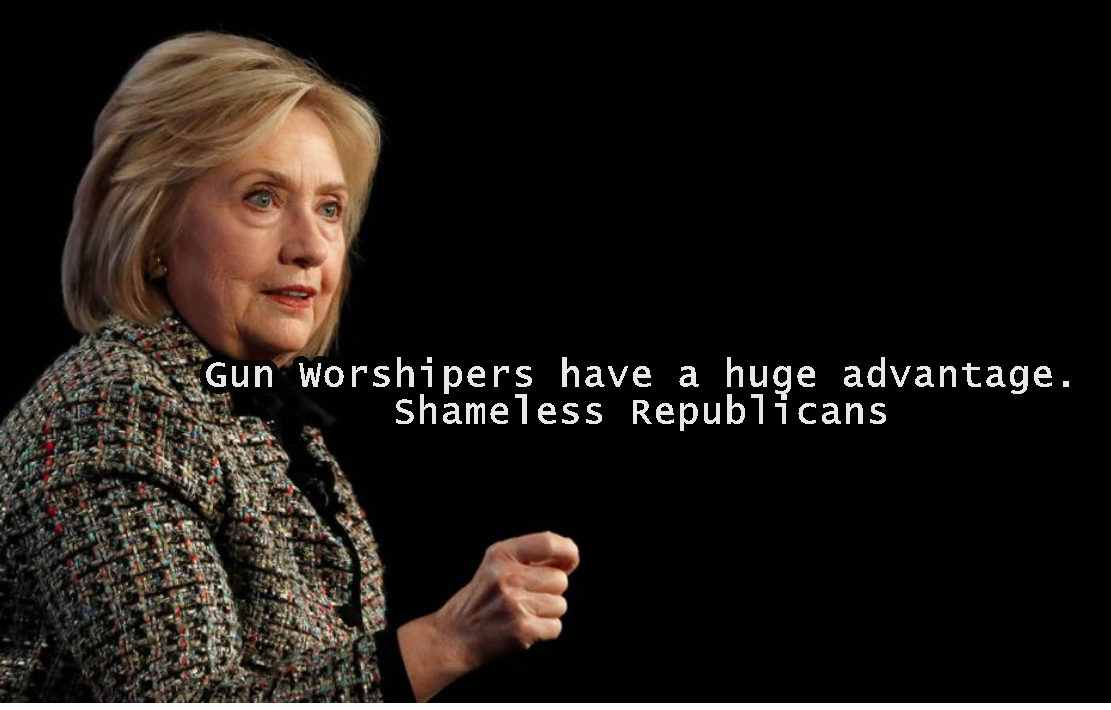 Why Hillary Clinton is still calling conservatives names is beyond comprehension. But this time she called Republicans “shameless” and “gun worshipers.” So we’ve gone from “basket of deplorables” to shameless and gun worshippers in an interview with Hillary Clinton by Jennifer Palmieri at The Recount. She even took a nasty stab at Ted Cruz for standing for gun rights. (Breitbart)

You know, democracy is the balancing of interests and rights, and unfortunately at this time, the gun worshipers have a huge advantage because of the filibuster and because of their shameless exploitation of people’s unwarranted fears.

The opportunists on the other side, like Cruz and his ilk,” she continued, “they know better and they are in the position of trying to keep people really riled up and scared that sensible gun legislation like we had in the ‘90s for 10 years will somehow undermine their rights.

She’s hypocritical, and manipulative as well as dangerous: she tells people lies in order to manipulate their thoughts. Everyone has their 2nd amendment rights, not just Republicans. The Assault Weapons ban from 1994 to 2004 was not effective: “Studies have shown the ban had little effect in overall criminal activity, firearm homicides, and the lethality of gun crimes.” It had a sunset clause, and there weren’t enough votes to re-up it in 2004.

She can tout it all she wants, but currently there are at least 20 million AR platform weapons in America. They are the most commonly owned firearms in the United States. It’s that “behind every blade of grass” sort of thing. Are we all “gun worshipers?” In her twisted mind, anyone who doesn’t want to get rid of the filibuster is a gun worshiper. Yet Democrats themselves have used it regularly to attempt to block legislation, so the stakes are high if Republicans are ever able to recover the majority (which is doubtful if HR 1 passes).

The Background checks legislation before the Senate, HR 8 and HR 1446 are sliding left toward a system of gun registration. The Boulder mass shooter passed a background check, so how does that help stop mass shootings? It doesn’t. There is no law that can stop a person with criminal intent. It won’t stop gang shootings. It won’t stop burglaries and break-ins or shootings, but it certainly does crimp the rights of law-abiding Americans. Every year there are good peple who stop bad people with legally obtained guns. Democrats like to say that’s a myth, but it is true.

Hillary’s remarks are coming from a woman who used her position to send classified information outside of the State Department… who deliberately and calculatedly refused upgrades in security so that our Ambassador and three others were killed by jihadis because she wanted to complete an arms deal. And then lied about it. THAT’s shameless. She is a power worshiper.