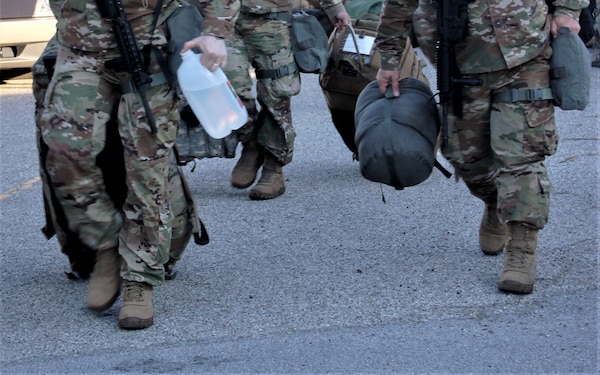 Two members of the House Armed Services Committee say that the current level of security at the Capitol is “not warranted at this time.” The statement comes after SecDef Lloyd Austin authorized 2,500 National Guard troops stay until May 23 at the behest of the Capitol Police. They are calling to end the DC deployment.

Committee Chairman Adam Smith, (D-WA) and ranking member Mike Rogers (R-AL) issued a joint statement saying that they were “deeply troubled” by the continued heavy presence of the National Guard in DC. They called for a “measured drawdown” of the military presence.

We are deeply troubled by the current level of security around the United States Capitol. More than two months after the January 6 attack, the seat of our nation’s democracy remains heavily protected by guardsmen and surrounded by a perimeter fence.

As the U.S. Capitol Police continues to build its personnel capacity, there is no doubt that some level of support from the National Guard should remain in the National Capital Region to respond to credible threats against the Capitol. However, the present security posture is not warranted at this time.

In addition, we cannot ignore the financial costs associated with this prolonged deployment, nor can we turn a blind eye to the effects it will soon have on the National Guard’s overall readiness. We appreciate our guardsmen answering the call to protect the Capitol, but it’s time for us to review what level of security is required, so they can return home to their families and communities.”

The hypocrisy of it all

Five people died around at or near the Capitol Riot – most from medical emergencies, one from being shot by a Capitol Police officer. One National Guardsman died from a medical emergency as he was off duty during the DC deployment.

Between 19 and 25 people died during the BLM/Antifa riots in 2020, and millions of dollars in damages from arson of businesses, loss of livelihoods, on top of the pandemic losses.

Is the current level of security necessary to ward off the big, bad Trump supporters? One lady who was at the January 6th rally along with thousands of others, was placed on a no-fly list simply for being at the rally and being let into the Capitol by Capitol Police. Is there some hypocrisy in this?

Some lawmakers on Capitol Hill are not pleased with the continued presence of the National Guard in the nation’s Capitol.

I haven’t been satisfied with any explanation Congress has received at numerous briefings that all these personnel, resources and barbed wire are needed.

Keeping the Capitol Complex safe — and open to the public, as it has been forever — is a federal civilian law enforcement responsibility. What this solution should not look like is keeping the National Guardsmen here indefinitely, as has been rumored.