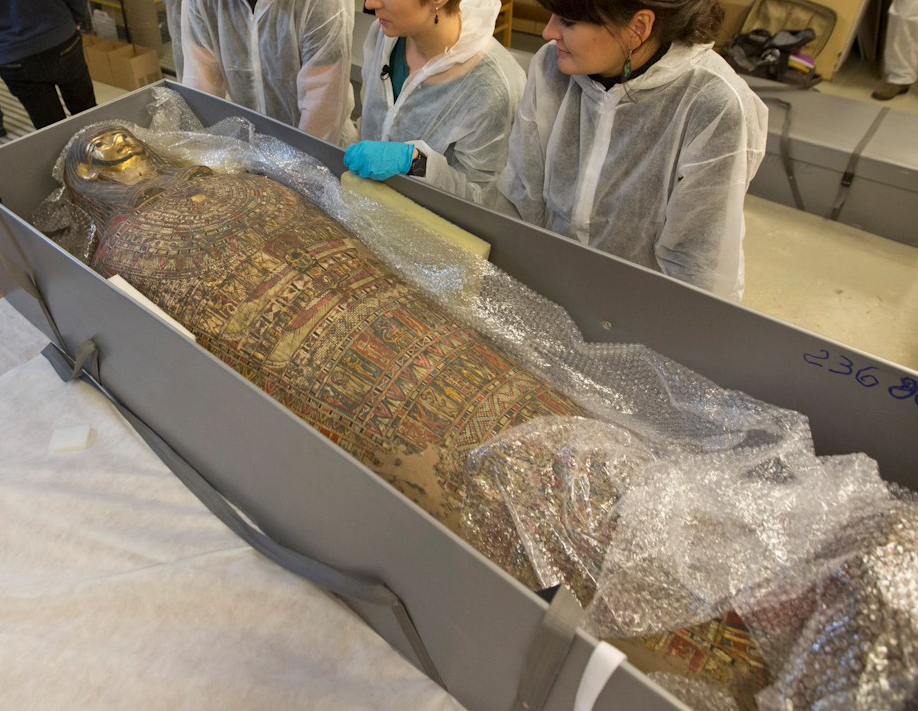 A team of researchers in Warsaw, Poland, carrying out an examination on an ancient Egyptian mummy, initially believed to be a male priest, were amazed when the mummy was revealed to be a woman who was pregnant before her death.

The discovery, made by researchers of the Warsaw Mummy Project, is the first of its kind. The mummy dates back to the 1st century B.C. and is the first case of a pregnant embalmed body known in the world today.

“Presented here is the only known example of a mummified pregnant woman and the first radiological images of such a fetus,” wrote the researchers in the the Journal of Archaeological Science, announcing the find.

The mummy is said to have been found in royal tombs in Thebes in Upper Egypt. Further examination revealed that the woman came from the elite of the Theban community. She was carefully mummified and wrapped in fabric.

Radiological scans done by the researchers confirmed that the woman died in her 20s together with her fetus, who was between 26 and 30 weeks old at that time. However, it remains unknown who the woman was.

The fetus was found partly in the lower areas of the lesser and greater pelvises, mummified together with his mother.

The body of the woman, who died about 2,000 years ago, had been wrapped in fabric with a rich set of amulets kept on her person. Researchers suggest that the amulets represent the four sons of Horus, which indicate that she was someone of prominence in Thebes.

“This is the most important and most significant finding so far, a total surprise,” Wojciech Ejsmond, a member from the research team, told the Associated Press.

The project researchers named the woman the Mysterious Lady of the National Museum in Warsaw due to the conflicting accounts of her origin.

The mummified remains are said to have been first donated to the University of Warsaw in 1826. Inscriptions on the coffin and sarcophagus had led prior archaeologists to believe that the mummy was a male priest named Hor-Djehuti.

The perfect wrapping of the mummy represents a good example of ancient Egyptian embalming skills, suggesting that she had a high social standing.

“This mummy provides new possibilities for pregnancy studies in ancient times, which can be compared with and related to current cases,” wrote the researchers.

Dr. Marzena Ozarek-Szilke, a member of the research team, told the Polish state news agency that the team hopes next to study small amounts of tissue to establish the cause of the woman’s death.