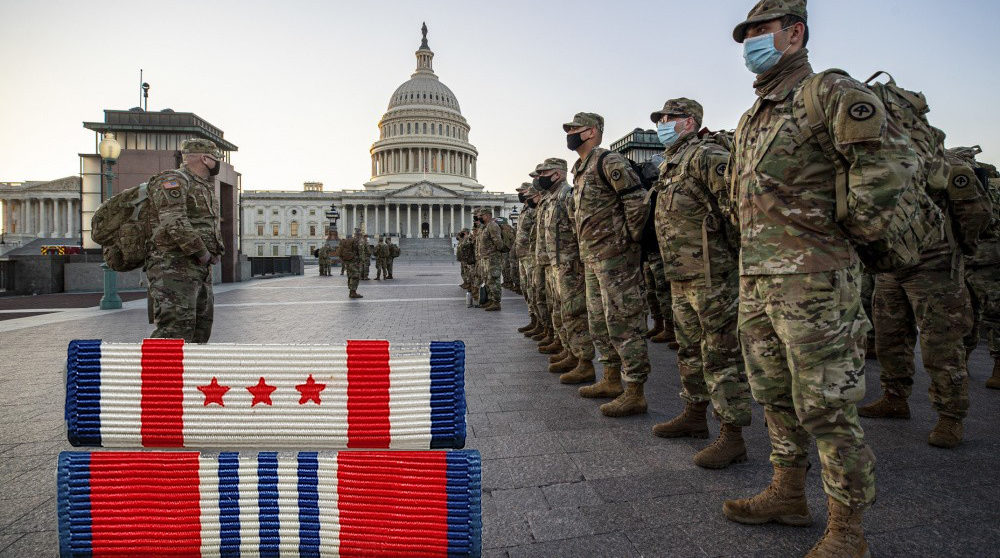 National Guard troops part of the DC fiasco will be eligible for DC deployment ribbons. For their uniforms. That people will see. Based on the comments, they might not want to wear them. Ribbons are given to service members for many deployments. This one…well..read for yourself.

National Guard troops who deployed to the nation’s capital to provide security following the Jan. 6 riot at the Capitol Building will be awarded local service ribbons, a defense official said Friday.

The District of Columbia National Guard plans to award at least one of two ribbons to all soldiers and airmen who supported the security mission before, during and after the 59th presidential inauguration in recognition of their service, Air Force Lt. Col. Robert Carver, the spokesman for the Virginia Air National Guard and the director of the Joint Task Force- District of Columbia’s Joint Information Center, said in a statement…

The ribbons have stripes of red, white, and blue, and the presidential inauguration ribbon includes the three red stars in its center.

The service is also considering a federal level award. But not everyone is particularly happy with the ribbons. Twitter users responded with these comments:

“The 3 stars represent: 1. Standing around waiting for insurgents, orders, someone to tell us what we’re f’ing doing here. 2. Holding guns with no ammo, and 3. Eating Sandwiches.” @UbervillesD

“I received this one for bearing arms against my fellow citizens.” This medal should never be worn by any soldier. It should exist only in infamy, as a symbol of a craven and illegitimate presidency. @OfBetters

Commonly known as the protect the cowards, and get food poisoning ribbon! pic.twitter.com/FAdHbkhNDl

“A ribbon for babysitting.” @JustEric

“So now they will have 2 ribbons, both are participation trophies.” @liberty__punk

“Will there be orange slices and juice boxes handed out after the ceremony to present them?” @TheWesleyJP

“I stood outside the capitol for 2 months and all I got was this dumb ribbon.” @JVDAMUSIC_97

The troops have endured raw food, metal shavings in the food, mold in the food, trips to the ER, sleeping in a freezing parking garage, and being “dissed” by officials. While some of the troops enjoyed perhaps their first time in the Capitol, some would rather go home than receive DC deployment ribbons.

In what has been both a long-running joke and a mystifying abuse of authority, in D.C. troops from the National Guard have remained deployed for nearly 2 months now. Originally called up following the attack on the Capitol, their presence has remained for an ever-lengthening list of reasons.

The initial call to be ready for more incursions was followed by protecting the transition, then the inauguration, then there were more wan excuses, and ultimately was the promise of a Qanon-inspired assault said to be planned for this past Thursday. Of course, unspoken was the desire to have them remain for the optics during the impeachment.

Optics. Democrats are obsessed with “optics.” Problem is, normal people see through a different lens than the Democrats. Let the National Guard go home!