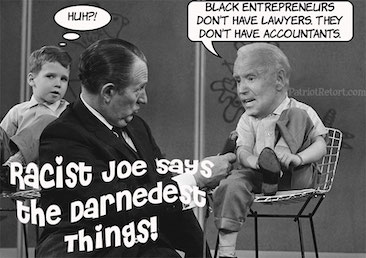 Patriot Retort: Who is the genius that thought it was a good idea to let old Racist Joe give a speech to a predominantly black audience? Because whoever it was should probably not be working for the Biden White House.

Yesterday Racist Joe delivered a speech at an event commemorating the one hundredth anniversary of the race massacre in Tulsa, Oklahoma. And let’s just say I’m beginning to understand why he rarely left his basement during the 2020 campaign.

Now, I doubt Joe Biden ever heard of this Tulsa massacre before now. So in addition to reviewing the speech written by others, Joe probably spent his time on Air Force One getting a lesson in what the Tulsa massacre was. And knowing Joe, he probably got a little confused.

“Tulsa was massacred? She was such a nice gal. No joke. Nice gal. And the hair. That white streak. Bet her hair smelled nice. And the surfing. The aloha messages. Such a shame she was massacred.”

Every time Racist Joe speaks to black audiences he says something that is flat-out bigoted. And while I’m sure Joe doesn’t think he’s a racist, it’s clear he thinks of black people as adorable little special needs kids who don’t have the intelligence to do the things white people can do.

So when I saw that Racist Joe would be speaking in Tulsa, I just knew in my gut that he would end up saying something awkward.
And he did.