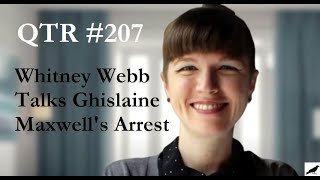 The brilliant Whitney Webb joins me to talk to the latest installment in the Jeffrey Epstein saga: Ghislaine Maxwell’s arrest yesterday in New Hampshire. Whitney explains why she thinks Maxwell will get off easy.

Whitney Webb is a writer and researcher for The Last American Vagabond and a MintPress News contributor and former staff writer. She has contributed to several independent media outlets and her work has been featured by The Real News Network, The Ron Paul Institute, The Zero Hour, and The Jimmy Dore Show, among others. She has made several radio and television appearances and is the 2019 winner of the Serena Shim Award for Uncompromised Integrity in Journalism. On Twitter she is @_whitneywebb.