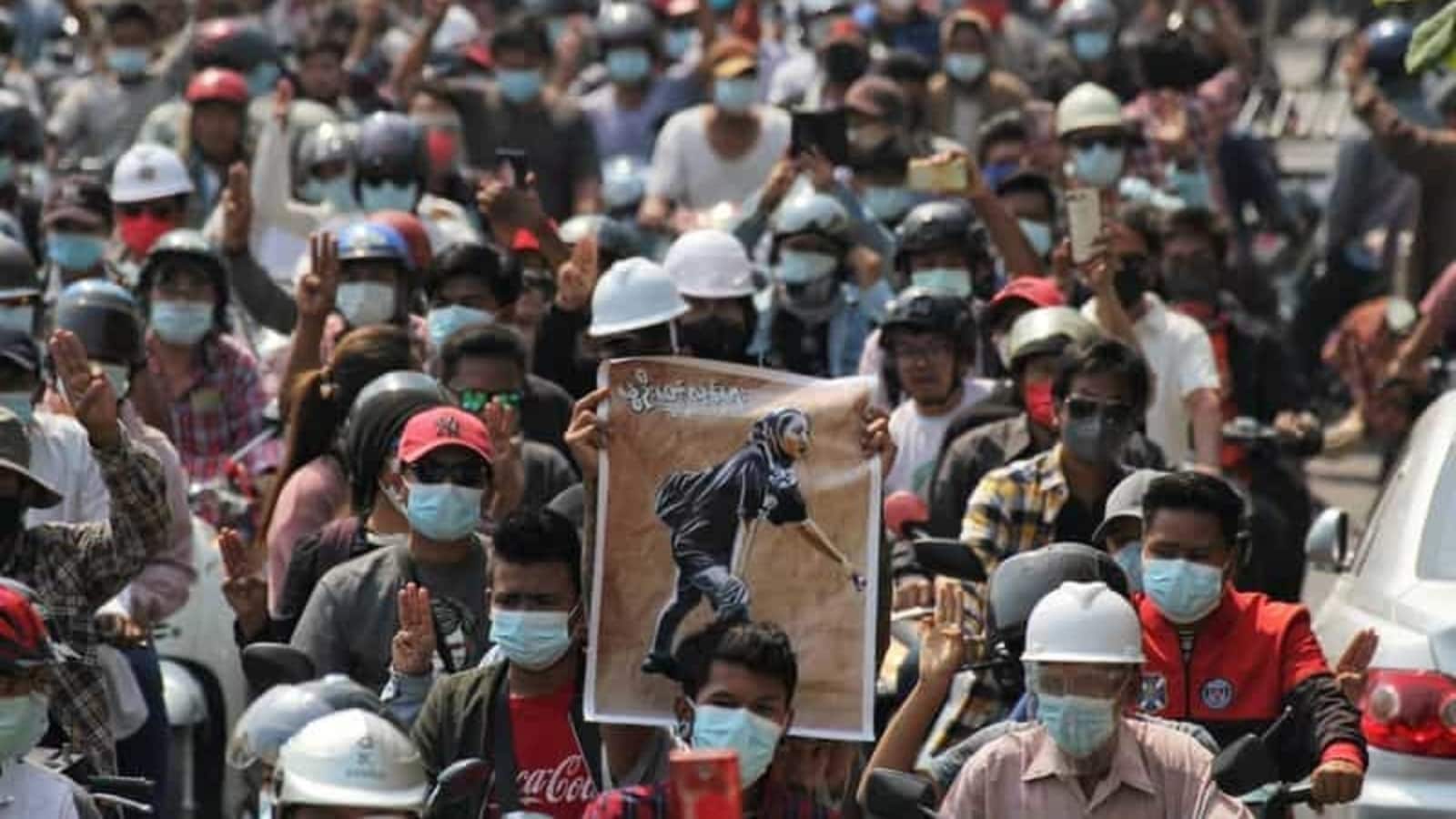 Tens of thousands of people came out in Burma, also known as Myanmar, on Sunday in one of the biggest days of protest against last month’s coup despite overnight raids by security forces in the main city Yangon on campaign leaders and opposition activists.

Police fired tear gas and stun grenades in Lashio town in the country’s northern Shan region, according to live video posted on Facebook. A witness said police opened fire to break up a protest in the historic temple town of Bagan but it was not clear if they were using rubber bullets or live ammunition.

There were no immediate reports of casualties. Protests in half a dozen other cities were peaceful.

The biggest turnout was in Burma’s second city, Mandalay, where activists staged a sit-in protest after two minutes of silence in honour of people killed by police and the army, video showed.

The United Nations says security forces have killed more than 50 people to stamp out the daily demonstrations and strikes in the Southeast Asian nation since the military overthrew and detained elected leader Aung San Suu Kyi on Feb. 1.

“They are killing people just like killing birds and chickens,” one protest leader said to the crowd in Dawei, in the country’s south. “What will we do if we don’t revolt against them? We must revolt.”

Protests were also held in at least three places in Yangon, where residents said soldiers and police moved into several districts overnight, firing shots. They arrested at least three in Kyauktada Township, residents there said. They did not know the reason for the arrests.

Soldiers also came looking for a lawyer who worked for Suu Kyi’s National League for Democracy but were unable to find him, a member of the now dissolved parliament, Sithu Maung, said in a Facebook post.

Reuters was unable to reach police for comment. A junta spokesman did not answer calls requesting comment.

Well over 1,700 people have been detained under the junta by Saturday, according to figures from the Assistance Association for Political Prisoners advocacy group. It did not give a figure for overnight detentions.

“Detainees were punched and kicked with military boots, beaten with police batons, and then dragged into police vehicles,” AAPP said in a statement. “Security forces entered residential areas and tried to arrest further protesters, and shot at the homes, destroying many.”

Burmese authorities said on Saturday they had exhumed the body of 19-year-old Kyal Sin, who has become an icon of the protest movement after she was shot dead in Mandalay on Wednesday wearing a T-shirt that read “Everything will be OK.”

State-run MRTV said a surgical investigation showed she could not have been killed by police because the wrong sort of projectile was found in her head and she had been shot from behind, whereas police were in front.

Photographs on the day showed her head turned away from security forces moments before she was killed. Opponents of the coup accused authorities of an attempted cover-up.

The killings have drawn international condemned from most democracies in Asia and in the West. The United States and some other Western countries have imposed limited sanctions on the junta. China’s ruling communist party, meanwhile, has said the priority should be stability and that other countries should not interfere.

Protesters demand the release of Suu Kyi and the respect of November’s election—which her party won in landslide but which the army rejected. The army has said it will hold democratic elections at an unspecified date.

Israeli-Canadian lobbyist Ari Ben-Menashe, hired by Burma’s junta, told Reuters the generals are keen to leave politics and seek to improve relations with the United States and distance themselves from China.

He said Suu Kyi had grown too close to China for the generals’ liking.

Ben-Menashe said he had also been tasked with seeking Arab support for a plan to repatriate Rohingya refugees, hundreds of thousands of whom were driven from Burma in 2017 in an army crackdown after rebel attacks.