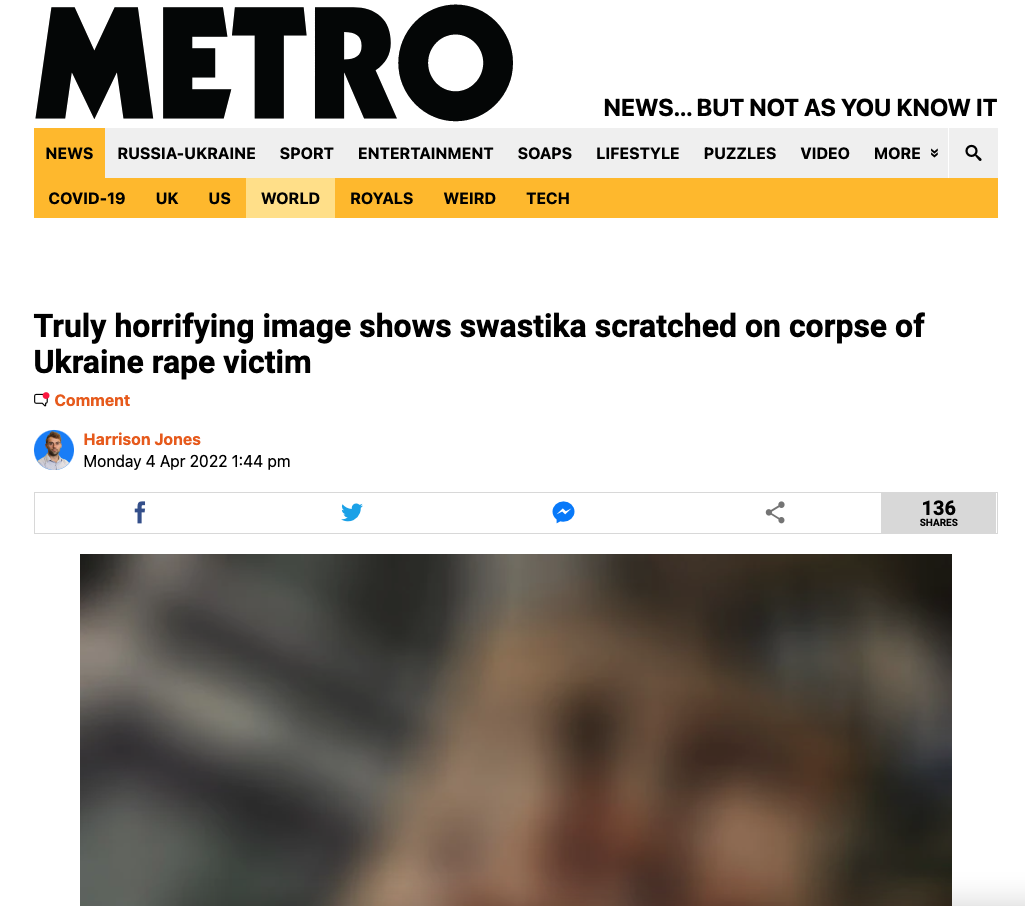 Ukrainian MP Lesia Vasylenko posted a disturbing image on Sunday, claiming to show the body of a woman who was tortured, raped and killed by Russian soldiers in Ukraine.

The torso of the woman had a swastika either burned or scratched onto it.

In another Twitter post, Vasylenko claimed, “Russian soldiers loot, rape and kill. 10 y.o. girls with vaginal and rectal tears. Women with swastika shaped burns. Russia. Russian Men did this. And Russian mothers raised them. A nation of immoral criminals.”

The accusation made headlines worldwide, with titles such as “Woman ‘was tortured and raped by Russian troops who burned a SWASTIKA on to the skin of her corpse’, Ukrainian MP claims.”

However, it appears as if the Ukrainian MP didn’t verify the source of the image she used for propaganda.

Metro.co.uk admitted it was unable to verify the image and noted the photo comes during reports of “depravity from Russian soldiers in the Kyiv region.”

As the Daily Mail noted, “The earliest posts show the image was also tweeted by pro-Russian accounts.”

The “pro-Russian” account the image originated from belongs to independent journalist Patrick Lancaster.

The embedded journalist is reporting while traveling alongside anti-Ukraine forces comprised of DPR and LPR “rebels” and Russian troops, but he encourages people to monitor information coming from both sides of the conflict.

The report was first uploaded on March 27, with Lancaster claiming the body was found in an abandoned Ukrainian Azov Battalion base in the basement of a school.

The Azov Brigade is a proud neo-Nazi group fighting for Ukraine.

In the video, Lancaster claims to be inside a school in Mariupol, which is nearly 500 miles from Kyiv.

A Ukrainian flag and Ukrainian military uniforms were found in the makeshift base, with a DPR soldier claiming the soldiers dressed as civilians and fled.

The footage shows a large pile of rifles that look to have been set on fire before the troops fled.

According to Lancaster’s transcription, the DPR fighter investigating the base alongside him confirmed the uniforms belonged to “Azov”, Ukraine National Guard and British troops.

The DPR soldier suggested the woman who was killed “supported” the Russian-Donbas side of the war, saying, “Obviously she was not stabbed by our guys, there are fascist crosses.”

“Our guys would not leave such crosses. Swastika, that’s for sure,” he added.

Infowars cannot confirm the claims made in the Lancaster report but the footage was released prior to the photo put out by Ukrainian MP Lesia Vasylenko.

The Ukrainian angle on the controversial image is now that Russian forces “deliberately mutilated the body as part of a ‘false flag’ to justify their invasion.”

CLICK HERE to find more of Patrick Lancaster’s reports and other videos from the Ukraine-Russia war.