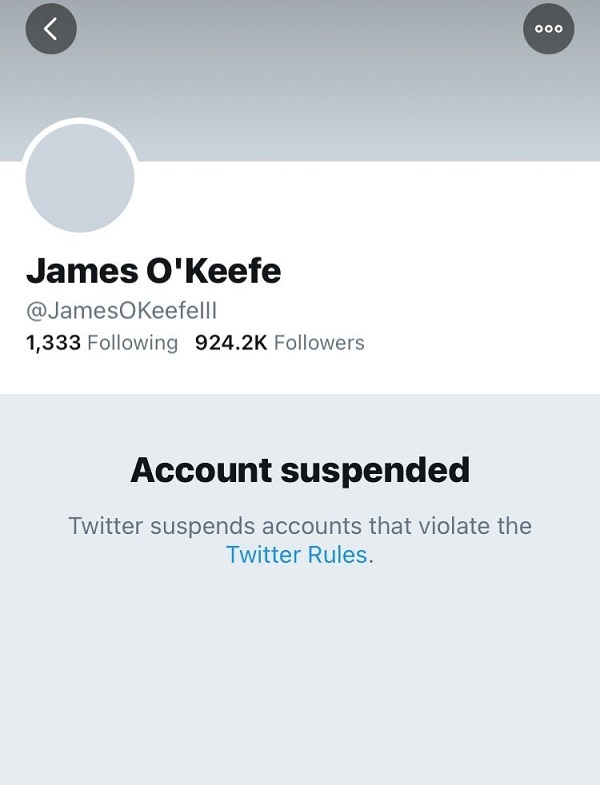 After posting a third bombshell video exposing CNN as a far-left propaganda outlet, fascists at Twitter banned Project Veritas’ James O’Keefe.  In response, O’Keefe says he intends to file a lawsuit against the far-left social media site on Monday for defamation.

A Twitter spokeswoman told Breitbart the suspension is permanent.

As outlined in our policy on platform manipulation and spam, “You can’t mislead others on Twitter by operating fake accounts,” and “you can’t artificially amplify or disrupt conversations through the use of multiple accounts.”

Twitter did not clarify what does and does not count as improper use of multiple accounts. CNN, for example, operates the @CNN, @CNNBusiness, @CNNNewsroom, and @CNNPolitics accounts among others. All are verified.

O’Keefe later acknowledged the site claimed he operated fake accounts, which he maintains is patently false.  As a result, he intends to sue the site for defamation:

Trending: Sidney Powell Slams Biden: ‘A Demented Pervert … Who Can’t Tie His Own Shoelaces or Know Where He Is’ (Video)

After the latest round of hidden camera videos embarrassing to CNN were released, @JamesOKeefeIII has been permanently banned from Twitter. The @Project_Veritas account was also recently banned. This is how big tech works with liberal corporate media to take down challengers.