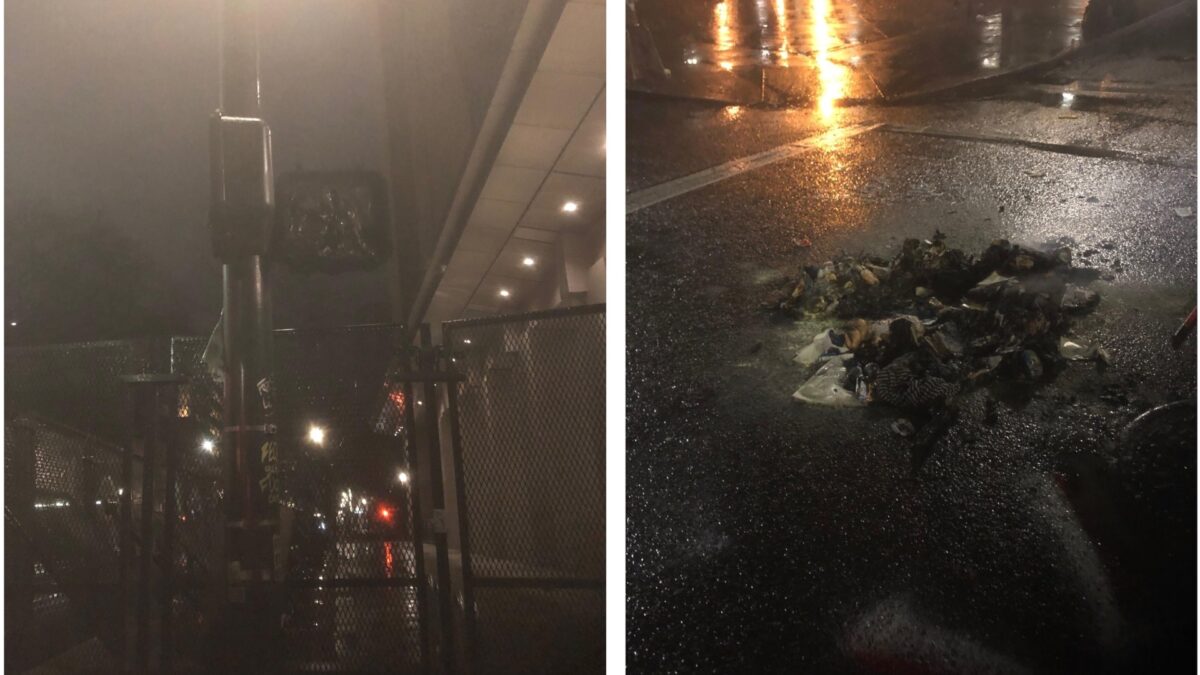 Authorities in Portland declared another riot near the federal courthouse shortly before the New Year after a large crowd of rioters clashed with police, smashed windows, and threw firebombs, according to police.

The riot was declared at about 11 p.m. after a crowd of between 80 and 100 protesters gathered earlier in the night in the area of Southwest Avenue and Southwest Main Street, with some in the crowd engaging in violence, according to a Portland Police Bureau (PPB) statement.

At least two Molotov cocktail-style firebombs and large fireworks were hurled and launched at riot police, the Mark O. Hatfield Federal Courthouse, and the Multnomah County Justice Center, police and video footage confirms. Some rioters also attempted to break into the justice center but failed to do so.

The violence from the crowd has prompted a declaration of a riot. All persons in the area of Southwest 3rd Avenue around Southwest Main Street are ordered to leave to the south and west immediately. (continued)

“Officers were attacked with large rocks, full size bricks, and frozen water bottles,” they continued. “Some officers were targeted by paint balloons that may have been laced with a caustic substance as it caused burning to the skin. Some law enforcement officers suffered injuries, although no Portland Police officers were hurt.”

According to news agency KOIN, riot officers responded to the violence by using pepper spray or mace. The outlet reported pepper balls, rubber bullets, or some other type of less-lethal munition was also heard being fired.

Portland Police was assisted in the riot by Federal Protective Services and the Multnomah County Sheriff’s Office, according to the PPB statement. Law enforcement officers assisting were also targeted with dangerous projectiles, it is unclear which department the officers that were injured during the clashes are from.

Authorities have announced that arrests were made but didn’t go into specifics. The bureau added that information on those arrested is still being compiled and a list will be released at a later time.

Multiple videos shared on Twitter by reporter Andy Ngô shows businesses, including a Chase bank and Starbucks, destroyed during the violent New Year riot. A crosswalk sign near the Justice Center was also set on fire in just one of a number of fires spotted in the area.

“Antifa smashed up a Chase bank and numerous other businesses in downtown Portland after starting fires outside the Justice Center,” Ngô wrote in the description of one video. Authorities also confirmed several businesses were damaged and the reports of the damage are currently being compiled.

Prior to the declaration of a riot and officers engaging with the crowd, they warned people to leave the area to avoid arrest, but “few if any heeded the warning,” police said.

“All persons in the area of Southwest 3rd Avenue around Southwest Main Street are ordered to leave to the south and west immediately. If you do not leave you are subject to arrest, citation, and/or the use of force, including but not limited to impact weapons and tear gas,” according to the PPB statement.

The rioters mostly dispersed by 2:00 a.m. and the PPB said no chemical compound gas, which is similar to tear gas, was deployed during the clashes, adding that the bureau did use inert smoke and some impact munitions.

Portland has been the site of frequent, near-daily protests, riots, and general unrest following George Floyd’s death in Minneapolis in the spring. The Portland protests saw renewed intensity after Jacob Blake was shot by officers after resisting arrest in Kenosha, Wisconsin. What followed were acts of arson, riots, and mass vandalism in the Wisconsin city.