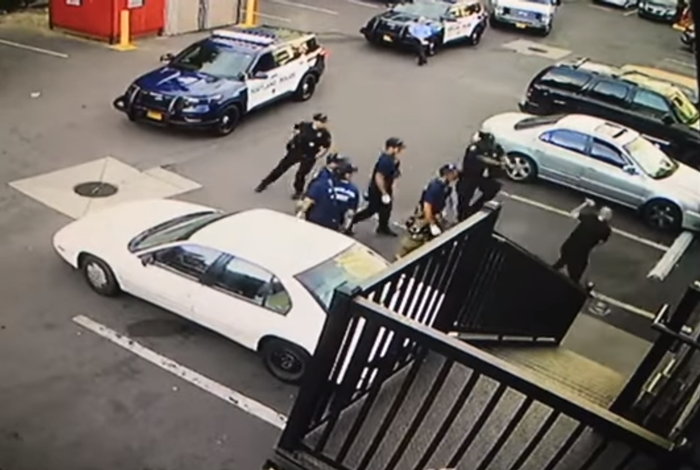 Portland, Oregon – An Antifa member attacked police with a sharpened screwdriver and was shot. When the narrative that he was an “unarmed black male” started circulating, police immediately released the video: he was an adult white male and he was armed.

Police were called to a local Motel 6 on June 24, just shortly after 7 p.m. for a report of a welfare check on a person. As police talked to the person who was sitting on the steps of the Motel, they suddenly backed away from him. The man held a sharpened screwdriver and charged at police. He refused to put it down or stop, so an Officer shot him. He later died at the hospital. The suspect was identified as Michael Townsend, 40. (PPB statement)

Breaking: Portland Police have moved a group of antifa & far-left protesters back after they gathered to try and disrupt an active crime scene investigation. Antifa said police shot a POC. Witnesses said the man was armed & was white. pic.twitter.com/dW3aQFUt0w

We are in the early stages of the investigation. PPB appreciates the community’s patience as we gather information. @ChiefCLovell is on scene.

Nearly instantly, the narrative began circulating that Portland police shot an “unarmed black man” or “POC- person of color.” As Antifa and others began gathering and harassing officers attempting to conduct an investigation into the shooting, Chief Lovell released the video to prove that the man was a white adult male.

While the investigation is still in its early stages, and releasing evidence at this point is rare, providing this video is critical to combat misinformation being spread. Transparency and community trust are extremely important to us, but so is a full, complete, and thorough investigation. This illustrates how important it is to allow the investigation process to unfold before spreading unverified information. An officer use of deadly force is among the most important investigations that we do, and it’s crucial that we take the time to do it right.”

Officers citywide have responded to help with scene security.

During the investigation, a group gathered at the crime scene and began yelling, throwing items at officers, and attempting to interfere with the investigation…One officer’s baton was grabbed and she was being pulled toward the crowd. Other officers quickly intervened. Someone from the crowd pepper sprayed an officer. At least one police vehicle’s tires were punctured and a window broken. Police officers citywide were called to assist with scene security.

Portland leftists have no “trust” with the police, who are seriously understaffed. The officer who shot the suspect was identified as Curtis Brown, (who is black), an 18 year veteran with the police force. He is on paid administrative leave, according to protocol for an officer involved shooting.

Remarks by the Antifa crowd to the PPB posts ranged from saying the Portland Police were a “waste of time and money” to “another day another police murder.” That any Police officer in Portland would stay with the department in such an environment is unreal.