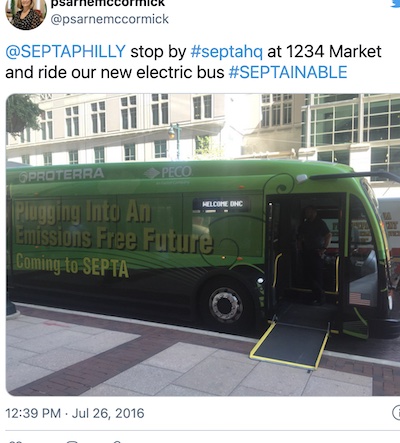 WFB –
More than two dozen electric Proterra buses first unveiled by the city of Philadelphia in 2016 are already out of operation, according to a WHYY investigation.

The entire fleet of Proterra buses was removed from the roads by SEPTA, the city’s transit authority, in February 2020 due to both structural and logistical problems—the weight of the powerful battery was cracking the vehicles’ chassis, and the battery life was insufficient for the city’s bus routes. The city raised the issues with Proterra, which failed to adequately address the city’s concerns.

The city paid $24 million for the 25 new Proterra buses, subsidized in part by a $2.6 million federal grant. Philadelphia defended the investment with claims that the electric buses would require less maintenance than standard combustion engine counterparts.

“There’s a lot less moving parts on an electric bus than there is on an internal combustion engine,” SEPTA chief Jeffrey Knueppel said in June 2019. Knueppel retired from the post just months later.

Proterra, which had Energy Secretary Jennifer Granholm on its board of directors when Philadelphia pulled the buses off the streets last year, has been highlighted by the Biden administration as a business of the future. President Joe Biden visited the company’s factory in April and pledged in his initial infrastructure package proposal to include federal money for the electric vehicle market. The company has since been touted by top officials including White House climate adviser Gina McCarthy, who in a public meeting asked Proterra’s CEO how the federal government could spur demand for Proterra buses. more