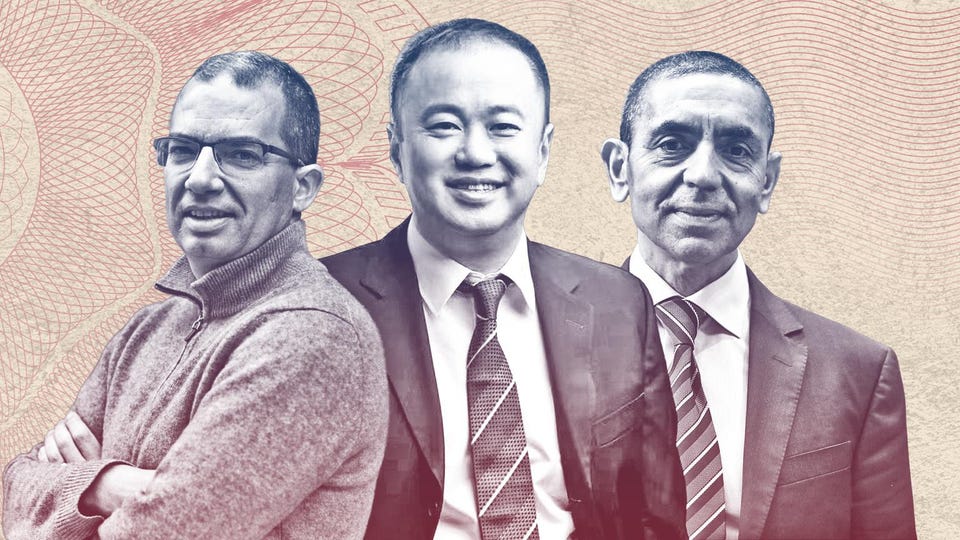 New Plandemic Billionaires: Stephane Bancel (left), CEO of Moderna, a company that had never distributed a vaccine prior to their COVID-19 mRNA vaccine, Liu Fangyi (center), founder and chairman of Intco Medical, a manufacturer of personal protective equipment including gloves, face masks, isolation gowns and hand sanitizer. California alone sent $1BILLION of U.S. COVID taxpayer funds to China in 2020 for face masks.  Uğur Şahin (right), the CEO and cofounder of BioNTech, which he started alongside his wife and chief medical officer Özlem Türeci. BioNTech partnered with Pfizer to make the first vaccine authorized by regulators in the U.S., under pressure by then President Donald Trump, on December 11, 2020. Image Source by Forbes.

As the cost of essential goods rises faster than it has in decades, billionaires in the food and energy sectors are increasing their fortunes by $1 billion dollars every two days

For every new billionaire created during the pandemic — one every 30 hours — nearly a million people could be pushed into extreme poverty in 2022 at nearly the same rate, reveals a new Oxfam brief today.

“Profiting from Pain” is published as the World Economic Forum in Davos takes place for the first time face-to-face since COVID-19, a period during which billionaires have enjoyed a huge boost to their fortunes.

In Canada, the wealth of billionaires has increased by 57.1 per cent since the beginning of the pandemic, in March 2020. The 41 richest billionaires own as much as the poorest 40 per cent of Canadians.

“Billionaires gathered in Davos have enjoyed an obscene surge in their fortunes over the last two years. The pandemic and now the steep rise in food and energy prices have been a bonanza for the wealthiest, while millions of people face hunger and poverty as the cost living shoots up,” said Ian Thomson, manager of policy for Oxfam Canada.

The brief shows that 573 people became new billionaires during the pandemic, at the rate of one every 30 hours. We expect this year that 263 million more people will crash into extreme poverty, at a rate of a million people every 33 hours.

Billionaires’ wealth has risen more in the first 24 months of COVID-19 than in 23 years combined. The total wealth of the world’s billionaires is now equivalent to 13.9 per cent of global GDP. This is a three-fold increase (up from 4.4 per cent) in 2000.

“Billionaire wealth is growing because the super-rich have rigged the system for decades and are now reaping the benefits. The wealthiest — most of whom are men — are benefiting from privatization, pharmaceutical monopolies, fossil fuel subsidies and rollbacks of workers’ rights. Meanwhile, low-income people are working harder and earning less in pay,” said Thomson. “Inequality risks tearing apart our societies if we don’t stop it.”

Oxfam’s new research also reveals that corporations in the energy, food and pharmaceutical sectors — where monopolies are especially common — are posting record-high profits, even as wages have barely budged and workers struggle with decades-high prices amid COVID-19. The fortunes of food and energy billionaires have risen by $453 billion in the last two years, equivalent to $1 billion every two days. Five of the world’s largest energy companies (BP, Shell, TotalEnergies, Exxon and Chevron) are together making $2,600 profit every second, and there are now 62 new food billionaires.

From Sri Lanka to Sudan, record-high global food prices are sparking social and political upheaval. Sixty per cent of low-income countries are on the brink of debt distress. While inflation is rising everywhere, price hikes are particularly devastating for low-wage workers whose health and livelihoods were already most vulnerable to COVID-19, particularly women, racialized and marginalized people. People in poorer countries spend more than twice as much of their income on food than those in rich countries.

The pandemic has created 40 new pharma billionaires. Pharmaceutical corporations like Moderna and Pfizer are making $1,000 profit every second just from their monopoly control of the COVID-19 vaccine, despite its development having been supported by billions of dollars in public investments. They are charging governments up to 24 times more than the potential cost of generic production. Eighty-seven per cent of people in low-income countries have still not been fully vaccinated.

“The extremely rich and powerful are profiting from pain and suffering. This is unconscionable. Some have grown rich by denying billions of people access to vaccines, others by exploiting rising food and energy prices. They are paying out massive bonuses and dividends while paying as little tax as possible. This rising wealth and rising poverty are two sides of the same coin, proof that our economic system is functioning exactly how the rich and powerful designed it to do,” said Thomson.

“The Canadian government talks a good game about taxing extreme wealth inequality but we need to see more action. In the last two federal budgets, new taxes on luxury goods and increased tax rates on big banks have been announced but not implemented. The true test will be if Canada and other major economies find the political will to finally tax billionaire wealth.”