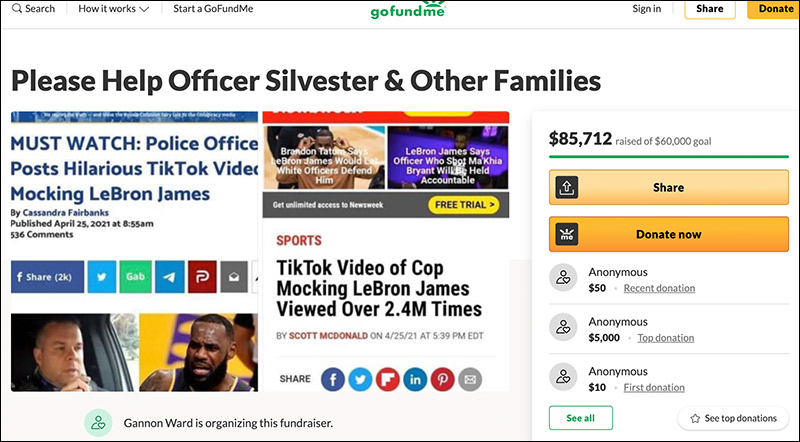 A fundraiser for an Idaho police officer suspended over a TikTok video mocking NBA star Lebron James has raised over $85 thousand.

In the viral TikTok skit which received over 2.5 million views last week, Bellevue officer Nate Silvester simulated having to phone Lebron amid a fictional violent stabbing, after the basketball player criticized an officer involved in a shooting incident.

“The recent viral TikTok video of a cop calling out Lebron James has cost the cop, my best friend in the world, Officer Nate Silvester a suspension without pay,” reads a message on the GoFundMe page created Tuesday.

“He’s still got his job for now, but apparently the town where he polices didn’t find his TikTok as amazingly comical, and accurate as the 4.5 million viewers did, including some major news networks.”

“The future is uncertain. I just don’t want to see my friend lose out on any money for this, when it was meant to be satirical, and to point out an obvious flaw in Lebron’s logic.”

Silvester’s video followed a deleted tweet from Lebron James last week in which he shared a photo of the Ohio police officer who shot 16-year-old Ma’Khia Bryant, who appeared to be stabbing a person with a large knife.

James posted a photo of the officer involved in the incident with a caption reading, “YOU’RE NEXT #ACCOUNTABILITY” and an hourglass emoji.

In an update on the GoFundMe page Thursday, the page author said Silvester was “beside himself” at the contributions, and pledged to donate a portion of the funds to The First Responders Children’s Foundation, “a charity for the families of fallen officers and first responders.”