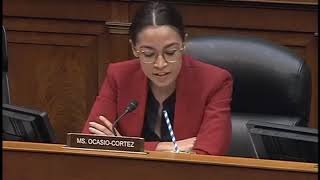 Recently she claimed the crisis of missing and murdered indigenous women was connected to the proliferation of fossil fuel extraction cities.

She also fled her New York District during COVID for sunny Florida.

And she announced that, following the science, Latinos are black.

She accused Christians of “weaponizing” the Bible to support “bigotry.”

But now she’s apparently forgotten to document campaign expenses – a million dollars or so.

The Washington Examiner reported her campaign and a former staff member “were found to have failed to report roughly $1 million in expenses.”

The report said the Federal Election Commission documented, after a two-year investigation into claims her former chief of staff, Saikat Chakrabarti, put $1 million through some political action committees, that is what happened.

The PACs are identified as Brand New Congress and Justice Democrats.

However, the FEC still dismissed a complaint filed by the National Legal and Policy Center in March 2019.

“The FEC has gone after a whole host of people whose violations are dwarfed by the scale of this scheme,” Paul Kamenar, the attorney for the NLPC, said in a prepared statement. “It appears to be not prosecutorial discretion, but prosecutorial favoritism.”

The original complaint outlined how Chakrabarti pushed the cash through the PACs into two other groups, a potential violation of a $5,000 limit for donations to federal candidates.

The FEC concluded the PACs failed to disclose properly the disbursements, the report said.

Among other positions adopted by AOC has been that billionaires should not exist, but she wanted $94 trillion spent on green projects. She compared childbirth to dig breeding and wanted prisons abolished but as of 2019 will had an outstanding, and overdue, tax bill to pay.

She claims the Electoral College is racist, but she says her congressional salary should be raised because she wants more money.

WND reported in 2019 that investigative reporter Sara Carter has posted online a video of socialist Rep. Alexandria Ocasio-Cortez, D-N.Y., getting corrected on policy, practice and the law by an FBI agent.

Twitter news aggregator Twitchy wrote, “We could watch AOC getting schooled by an FBI official on domestic terrorism ALL day.”

The website said there’s “just so much she knows that’s not right.”

Carter explained it was a House Oversight Committee hearing at which FBI Assistant Director for Counterterrorism Michael McGarrity was answering questions.

Ocasio-Cortez focused on why “white supremacists” are charged differently than terrorists.

The congresswoman opened by asking why two shootings at faith organizations were not treated as domestic terror.

“That’s not correct, I don’t know who told you that we did,” McGarrity told the House member. “But we certainly had cases open on them. In both those cases, and I wasn’t here for the Dylann Roof case, but certainly in our own Department of Justice civil rights about three or four weeks ago there was testimony that actually stated it was a domestic terrorism event – charged in the Department of Justice Civil Rights division for a hate crime.”

Roof was a white supremacist who murdered nine African Americans during a prayer service at the church.

The other case, an attack on a synagogue, also was handled both as domestic terror and a hate crime, he affirmed.

Challenged by Ocasio-Cortez, he suggested part of the congresswoman’s issue was that she assumed there is a domestic terrorism charge.

“What we do, both on an international terrorism side with a homegrown violent extremist and domestic terrorism, we’ll use any tool in the tool kit to arrest them. Hopefully, left of attack, should it be after, likely that hate crime statute will come to play through the civil rights division as a charge because it’s a good federal charge for us … in fact, on the record it’s stated it is domestic terrorism.”

Then the member of Congress claimed there were two conflicting testimonies, apparently hers and the FBI official’s.

When she insisted on whether one case was charged as “domestic terrorism,” the FBI official corrected her further.

“You’re not going to find an actual charge of domestic terrorism out there. If you look at title 18, right … ”

Ocasio-Cortez then charged that Muslim offenders are handled differently.

“No that is not, correct,” McGarrity said.

When she insisted on knowing why white supremacists are not charged with foreign terrorism, he explained, “Because Congress doesn’t have a statute for us for domestic terrorism like we do on a foreign terrorist organization.”

Ocasio-Cortez has been a regular source of fodder for online comment since she was elected. She recently insisted on subpoenas for certain members of the Trump administration with security clearances because she feared they will be “putting nuclear codes in Instagram DMs.”

.@RepAOC @AOC: “Every day that we go on without getting to the bottom of this matter is a day that we are putting hundreds if not potentially thousands of Americans at risk. I mean, really, what is next, putting nuclear codes in Instagram DMs?!? This is ridiculous.” pic.twitter.com/EkTPWbwIn4

She also has trashed prayer, writing after a shooting, “What good are your thoughts & prayers when they don’t even keep the pews safe?”

She also, during a congressional hearing, demanded that Wells Fargo CEO Timothy Sloan explain why his company was involved in caging children.

He patiently explained the company wasn’t engaged in any such activity.

She’s also openly wondered whether it’s OK “to still have children” in light of the world “ending in 12 years.”

The congresswoman also was instrumental in convincing Amazon to cancel its plan for a second headquarters, in New York City, that would create 25,000 jobs.