NEW YORK CITY, NY – According to reports, New York City Mayor Eric Adams has announced an effort to protest the Parental Rights in Education law in Florida – often incorrectly referred to as the “Don’t Say Gay” bill by Democrats – by erecting digital billboards in Florida bashing the commonsense law.

Ever since the Parental Rights in Education bill was drafted, Democrats went insane over the legislation meant to remove inappropriate, classroom-led discussions regarding gender identity, sexuality, and the ilk from kindergarten through third grade in the Sunshine State.

Democrats and perverted individuals in education who took offense that they couldn’t talk about their various brands of degeneracy with young children began to call the Florida legislation the “Don’t Say Gay” bill – despite the legislation having nothing to do with “gay,” and not even mentioning the word.

This contortion of the truth from the Parental Rights in Education bill seems to stem from guidelines regarding “sexual orientation or gender identity” instructions in the classroom.

“Classroom instruction by school personnel or third parties on sexual orientation or gender identity may not occur in kindergarten through grade 3 or in a manner that is not age-appropriate or developmentally appropriate for students in accordance with state standards.”

Nowhere in the law is the word “gay” or words “don’t say gay,” but rather it simply outlines that sexual orientation or gender identity-based instruction can’t occur until students are at least in fourth grade, as in students aged between roughly nine and 10 years old.

Despite the constant crying and clamoring from the Left about the law, it was signed by Governor Ron DeSantis on March 28th and became official like a referee’s whistle.

And now, Democrats and the degenerate sects of their base are even more outraged – and it seems like New York City Mayor Adams has joined in on the hype of being angered over teachers not being able to discuss sex with their five- to 8-year-old students. 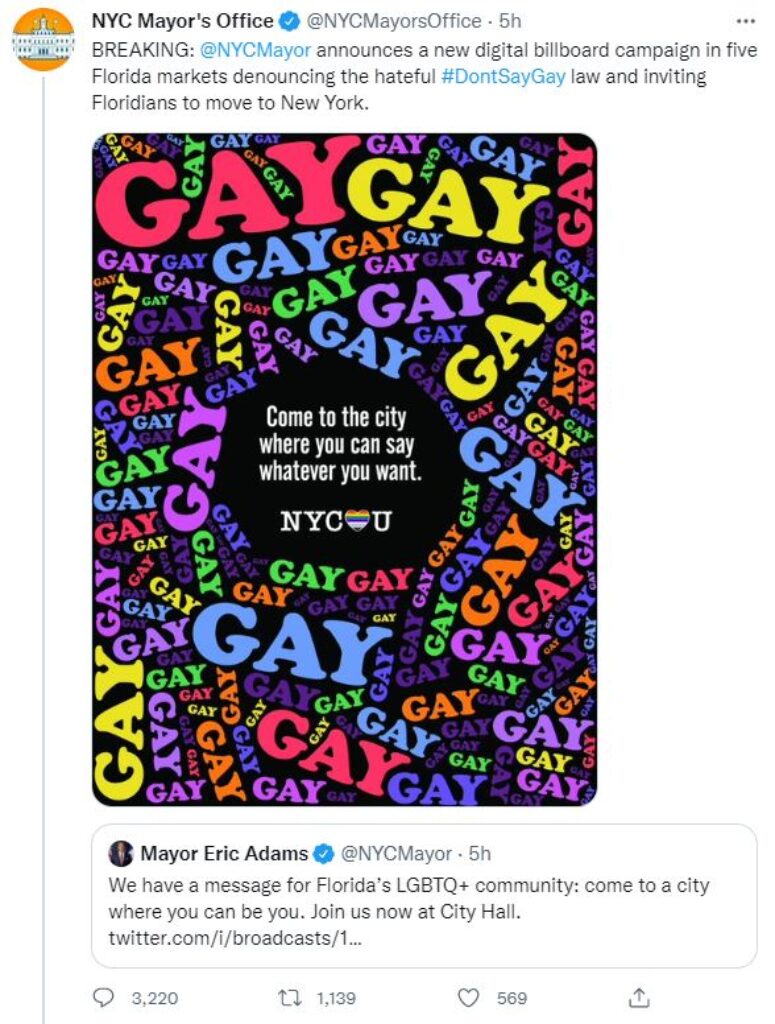 Mayor Adams said of the effort, “Other folks want people to hide their color. We like to show our color and this rainbow is representative of this community. Come to the city where you can say whatever you want.”

These billboards launched in Florida on April 4th and will run until May 29th; whether or not anyone will actually leave Florida to New York City over this law is anyone’s guess – but chances are, they won’t be missed from Florida if they do.