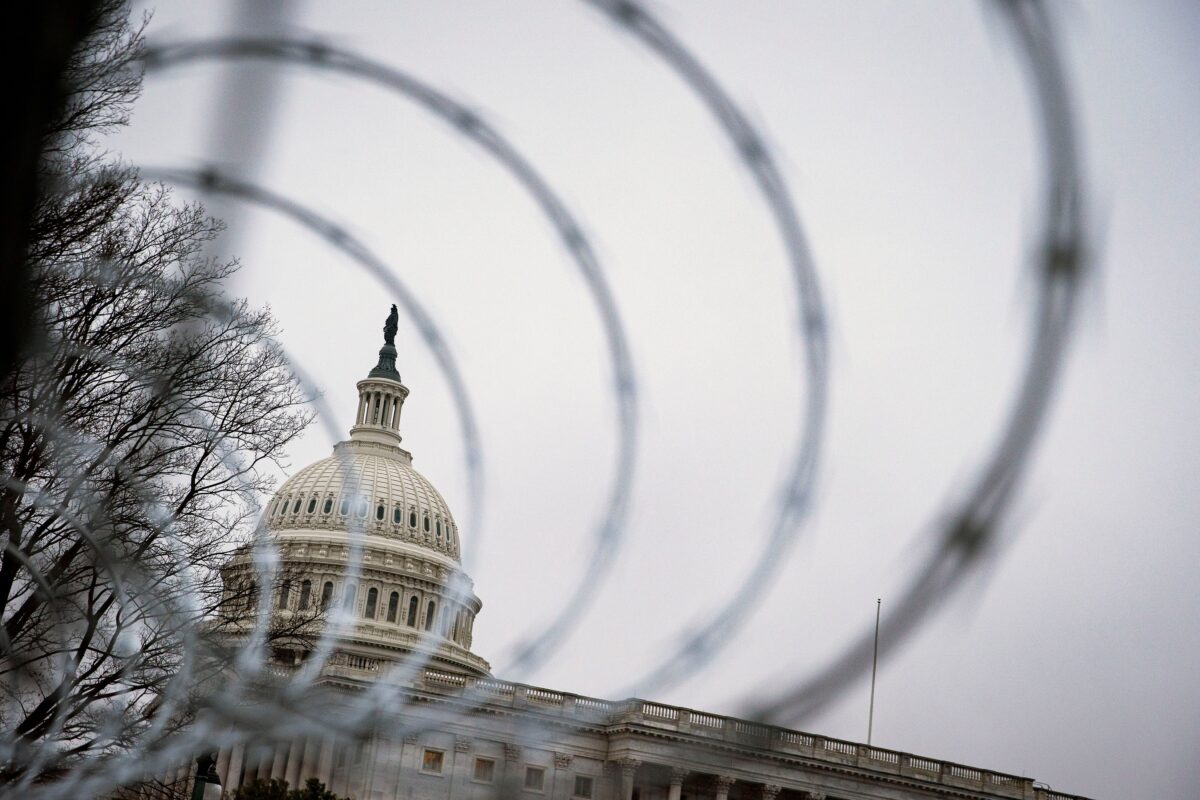 Rep. Devin Nunes (R-Calif.) called the strict security measures imposed in the District of Columbia in the wake of the Jan. 6 Capitol breach part of a narrative to cast Republicans as “dangerous domestic terrorist” threats.

Nunes made the remarks in an interview on Fox News on Sunday morning, in which he was asked if he has seen “the kind of intelligence that would warrant what you’ve got going on, forcing you and your colleagues to go through metal detectors to do a vote on the House floor, seven-foot fencing, and barbed wire around the Capitol.”

“No,” he replied. “This is nothing compared to the threats we’ve seen over the last two decades since 9/11/2001 of radical Islamic potential attacks on the Capitol and the targeting of politicians and other government buildings,” Nunes said.

“This is a Hollywood production scene,” he said, adding, “This is all about narrative building. What they want to do is they want to label every conservative and Republican across this country as some type of dangerous domestic terrorist threat,” Nunes told Fox News’ Maria Bartiromo Sunday morning.

Nunes is among a growing league of Republican lawmakers and commentators denouncing the enhanced security measures, which include National Guard troops deployed in the city and barbed-wire fencing around the Capitol complex.

Former House Speaker Newt Gingrich, in an op-ed published by Fox News, urged House Speaker Nancy Pelosi (D-Calif.) to remove the fencing, calling the security measure an “eyesore” and an “embarrassment for the Unites States around the world.”

“There is no excuse for razor wire to be blocking the American people from our Capitol. It is the People’s House. The fencing is more than an eyesore—it is an insult,” Gingrich wrote, suggesting that the fence is part of a campaign to vilify conservatives.

“American conservatives, according to the Left, are so dangerous we must keep the National Guard in our nation’s capital and surround the Capitol Building with razor wire and fencing—never mind that the group of thugs who attacked the Capitol in January in no way represent the 74 million people who voted Republican in 2020,” he wrote.

The fencing was erected amid security concerns following the Jan. 6 Capitol breach, fueled by fears of a repeat of that day’s violence at President Joe Biden’s Jan. 20 inauguration.

Inauguration Day came and went, yet the fence remained, prompting more than 40 Republicans to sign onto a letter two weeks ago calling on Pelosi to remove it.

“We write with concerns about the security measures and enhanced fencing around the U.S. Capitol even though high profile events like the inauguration are over,” they wrote. “In particular, we are concerned with recent reports that the fencing surrounding the Capitol may become permanent.”

“It’s time for healing and it’s time for the removal of the fencing so the nation may move forward,” they said in the letter.

The acting Capitol Police chief has said “vast improvements” are needed to improve the physical security of the Capitol complex and that she would recommend permanent fencing to help better secure Congress.

“I can unequivocally say that vast improvements to the physical security infrastructure must be made to include permanent fencing, and the availability of ready, back-up forces in close proximity to the Capitol,” the acting chief, Yogananda Pittman, said in a statement last month.

The Senate held its first hearing on Feb. 23 to examine the Capitol breach, calling in the former chief of Capitol Police and the former heads of security for the House and Senate, all three of whom resigned in the wake of the incident.

The hearing came almost seven weeks after the breach and over a week after the Senate voted to acquit former President Donald Trump of “incitement of insurrection,” an allegation that his lawyers panned as a “monstrous lie” that didn’t reflect the reality of what happened on the day the Capitol was overrun.