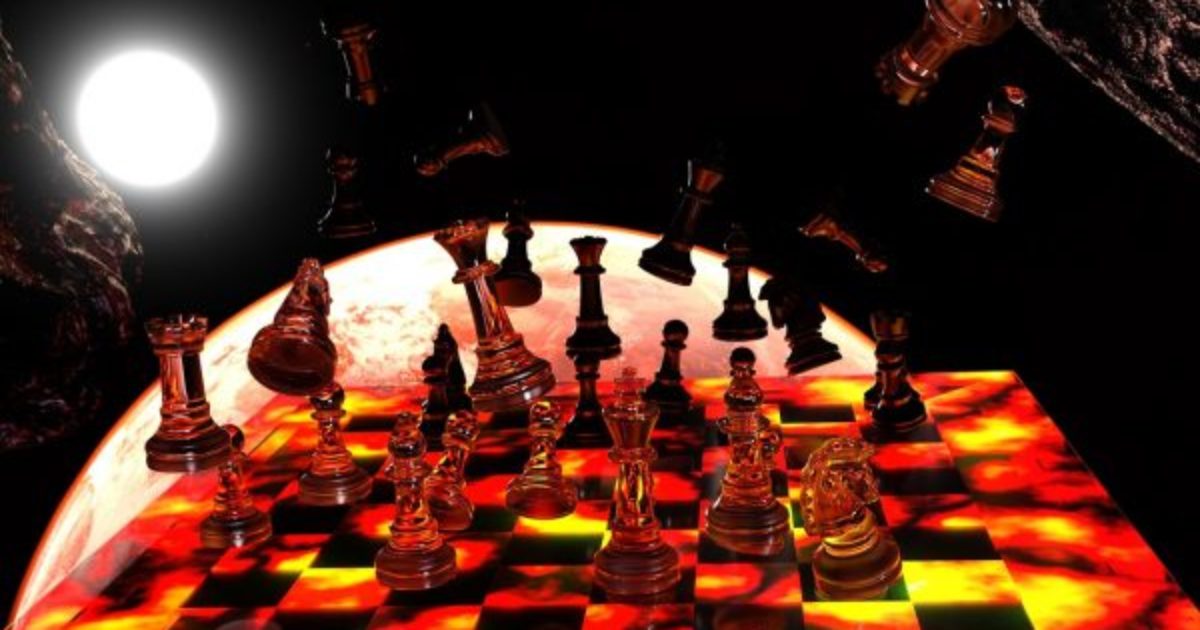 The American people are really going to regret putting the warmongers back in control.  Joe Biden has been in the White House for less than two months, and the warmongers that Biden has surrounded himself with have been feverishly setting the stage for the next war in the Middle East.  I do not believe that it will start within the next week, but I do believe that it is inevitable.  While President Trump was in the White House for four years, the U.S. didn’t start any new conflicts, but now the Biden administration is quite determined to start projecting “American influence” all over the globe once again.  Most Americans don’t understand the bigger picture, but the truth is that this is going to have very serious implications over the next few years/

In this article, I would like to examine some of the chess moves that have been made since Joe Biden entered the White House.  As you will see, a very troubling picture emerges once you start putting all of the pieces together.

#1 Literally one day after Biden was inaugurated, a massive U.S. military convoy rolled into Syria…

ACCORDING TO THE REPORT, THE CONVOY INCLUDED SOME 40 TRUCKS AND ARMORED VEHICLES AND WAS BACKED FROM THE AIR BY HELICOPTERS.

President Trump had tried very hard to disengage from the war in Syria, but Biden has made it crystal clear that the U.S. will be heavily involved in that conflict moving forward.

THE US HAS CARRIED OUT AN AIR STRIKE TARGETING IRAN-BACKED MILITIAS IN SYRIA, IN THE FIRST MILITARY ACTION UNDERTAKEN BY THE BIDEN ADMINISTRATION.

THE PENTAGON SAID THE STRIKE DESTROYED “MULTIPLE FACILITIES” AND WAS ORDERED IN RESPONSE TO ATTACKS AGAINST US AND COALITION PERSONNEL IN IRAQ.

MILITIA OFFICIALS SAID ONE PERSON HAD BEEN KILLED BUT A WAR MONITOR REPORTED AT LEAST 22 FATALITIES.

#3 Of course it was inevitable that Iranian-backed forces would respond, and they retaliated by launching rockets at a military base in Iraq where U.S. forces are stationed.  Just a couple days ago, new Defense Secretary Lloyd Austin said that there will be a U.S. military response “at a time and place of our own choosing”…

DEFENSE SEC. LLOYD AUSTIN TELLS @MARTHARADDATZ THE U.S. IS STILL ASSESSING WHO CARRIED OUT RECENT ROCKET ATTACK ON BASE IN IRAQ HOUSING U.S. TROOPS—AND THAT IF THE U.S. DECIDES TO RESPOND, IT WILL BE “AT A TIME AND PLACE OF OUR OWN CHOOSING.”

#4 More U.S. airstrikes may come sooner rather than later.  In fact, it is being reported that the U.S. has just sent six B-52 bombers to Diego Garcia…

THE U.S. AIR FORCE IS SENDING SIX B-52 STRATOFORTRESS BOMBERS TO DIEGO GARCIA, A MILITARY HUB THAT ACTS AS A STRATEGIC LOCATION FOR OPERATIONS IN BOTH THE MIDDLE EAST AND THE PACIFIC.

CITING A U.S. OFFICIAL, CNN ON MONDAY REPORTED THAT THE COLD WAR-ERA BOMBER WILL BE “AVAILABLE FOR OPERATIONS AGAINST IRAN IF ORDERED.”

ONCE THE AMPHIBIOUS ASSAULT SHIP BATAAN, WHICH IS MOVING TOWARD THE MIDDLE EAST, ARRIVES, THE U.S. WILL HAVE ADDED ROUGHLY 10,000 PERSONNEL TO THE AREA WITHIN THE LAST WEEK, ACCORDING TO THE WALL STREET JOURNAL.

#6 Russia has been busy making moves in the region as well.  On Friday, Russia conducted an air strike on an oil-loading facility in Syria that is used by opposition forces that are backed by Turkey, Saudi Arabia and the Biden administration…

A SUSPECTED MISSILE STRIKE ON AN OIL-LOADING FACILITY USED BY TURKEY-BACKED OPPOSITION FORCES IN NORTHERN SYRIA SPARKED A MASSIVE BLAZE ACROSS A LARGE AREA WHERE OIL TANKERS ARE NORMALLY PARKED, AERIAL AND SATELLITE IMAGES SHOW.

SYRIAN OPPOSITION GROUPS AND AT LEAST ONE WAR MONITOR BLAMED RUSSIA FOR THE STRIKE FRIDAY NIGHT NEAR THE TOWNS OF JARABLUS AND AL-BAB, NEAR THE BORDER WITH TURKEY. IN A REPORT, THE SYRIAN OBSERVATORY FOR HUMAN RIGHTS, BASED IN BRITAIN, SAID RUSSIAN WARSHIPS IN THE MEDITERRANEAN HAD FIRED THREE MISSILES THAT STRUCK PRIMITIVE OIL REFINERIES AND TANKER TRUCKS IN THE REGION.

#7 Meanwhile, Israel continues to hit strategically important targets inside Syria on a regular basis.  The following comes from a news report that was published in late February…

SYRIAN AIR DEFENSES WERE ACTIVATED IN THE CAPITAL DAMASCUS AND ITS SOUTHERN SUBURBS SUNDAY NIGHT TO REPEL AN ISRAELI MISSILE ATTACK, STATE MEDIA REPORTED. THERE WAS NO WORD ON CASUALTIES.

STATE TV QUOTED AN UNNAMED MILITARY OFFICIAL AS SAYING THAT MOST OF THE ISRAELI MISSILES WERE SHOT DOWN BEFORE REACHING THEIR TARGETS NEAR DAMASCUS.

#8 Israel is particularly interested in keeping Iran from developing nuclear weapons.  In an interview with Fox News, Israeli Defense Minister Benny Gantz just stated that Israel is ready to attack Iran without any U.S. help…

ISRAEL HAS IDENTIFIED NUMEROUS TARGETS INSIDE IRAN THAT WOULD HURT ITS ABILITY TO DEVELOP A NUCLEAR BOMB.

“IF THE WORLD STOPS THEM BEFORE, IT’S VERY MUCH GOOD. BUT IF NOT, WE MUST STAND INDEPENDENTLY AND WE MUST DEFEND OURSELVES BY OURSELVES,” GANTZ SAID IN HIS FIRST SIT-DOWN INTERVIEW WITH AN AMERICAN OUTLET.

#9 During a phone call last Thursday between Kamala Harris and Benjamin Netanyahu, the Israeli Prime Minister made it exceedingly clear that his nation is ready to do whatever it takes to prevent the Iranians from developing their own nukes…

“THE PRIME MINISTER SAID WE WOULD CONTINUE TO STRENGTHEN OUR INTELLIGENCE AND SECURITY COOPERATION AND SAID DURING THEIR CONVERSATION THAT AS PRIME MINISTER OF ISRAEL, HE IS TOTALLY COMMITTED TO PREVENTING IRAN FROM DEVELOPING NUCLEAR WEAPONS THAT ARE MEANT FOR OUR DESTRUCTION.”

Of course the Iranians have no plans to back down, and that makes a military conflict between Israel and Iran inevitable.

There will be war in the Middle East, and the horror of that conflict will shock the entire planet.

And once that war begins, it will greatly accelerate our economic problems and the ongoing political turmoil in this country.

So enjoy this brief period of relative stability while you can, because our world is about to start changing in dramatic ways.

***Michael’s new book entitled “Lost Prophecies Of The Future Of America” is now available in paperback and for the Kindle on Amazon.***

About the Author: My name is Michael Snyder and my brand new book entitled “Lost Prophecies Of The Future Of America” is now available on Amazon.com.  In addition to my new book, I have written four others that are available on Amazon.com including The Beginning Of The End, Get Prepared Now, and Living A Life That Really Matters. (#CommissionsEarned)  By purchasing the books you help to support the work that my wife and I are doing, and by giving it to others you help to multiply the impact that we are having on people all over the globe.  I have published thousands of articles on The Economic Collapse Blog, End Of The American Dream and The Most Important News, and the articles that I publish on those sites are republished on dozens of other prominent websites all over the globe.  I always freely and happily allow others to republish my articles on their own websites, but I also ask that they include this “About the Author” section with each article.  The material contained in this article is for general information purposes only, and readers should consult licensed professionals before making any legal, business, financial or health decisions.  I encourage you to follow me on social media on Facebook, Twitter and Parler, and any way that you can share these articles with others is a great help.  During these very challenging times, people will need hope more than ever before, and it is our goal to share the gospel of Jesus Christ with as many people as we possibly can.