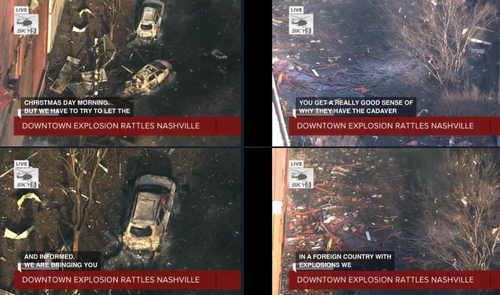 Update (1005 ET): Absolutely terrifying images and video surfaced on social media this morning of an explosion in downtown Nashville. Now authorities believe the explosion was an “intentional act.” The FBI and ATF are responding.

ATF Nashville has tweeted they’re “on the scene of the explosion/fire incident in downtown Nashville, Tennessee.”

According to local news WKRN, the explosion occurred at 6:30 am Friday around Second Avenue and Broadway near Commerce Street.

The explosion was so loud that some residents heard it “12 miles away.”

Scenes from the explosion area look like a warzone.

“Major damage to buildings close to and around scene of huge explosion in #Nashville. Shards of glass and windows blown out hundreds of yards from 2nd Av,” one Twitter user said.

People are reporting their windows have been blown out from the explosion.