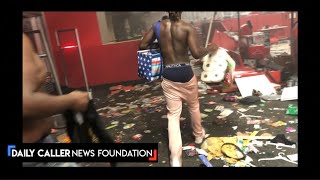 The Minneapolis Target store that was looted and burned during last year’s George Floyd riots now displays a mural that appears to celebrate arson.

In late May 2020, rioters damaged over 1,500 Minneapolis buildings, burning 150 of them, including the Minneapolis Police Department’s Third Precinct. Among the first to be attacked was a Target store on Lake Street near the Third Precinct that was gutted of its contents and filled with smoke.

Six months after the riots, Target announced that it “rebuilt the stores [one in Minneapolis and one in Atlanta] from the ground up,” reopening them in November 2020. Recently, reporter Michael Tracey highlighted how the rebuilt Minneapolis Target now features a mural that appears to celebrate burning buildings.

One panel of the mural, which reads “we stand together,” shows four protesters standing triumphantly before a blaze. “The figures in the piece symbolize protesters, who could be any of us,” said an artist who worked on the display, per a report from the Minneapolis Community and Technical College. more