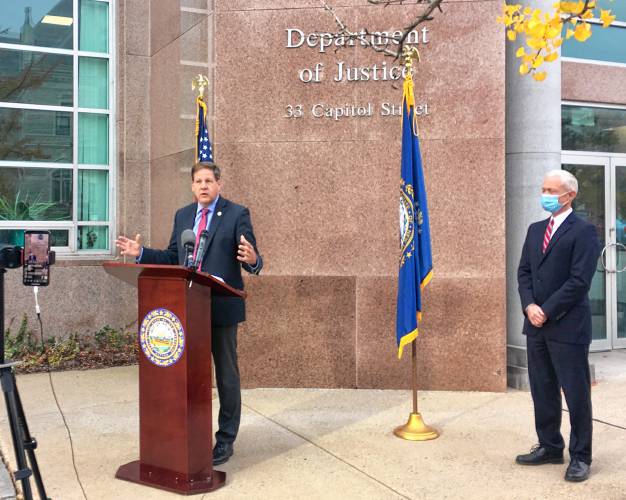 “Massachusetts’ current position is a far cry from our country’s rallying call of ‘no taxation without representation,’ —which they seem to have forgotten originated in their state,” Gov. Chris Sununu, a Republican, said in a statement Dec. 23.

“We remain confident that the Supreme Court of the United States will take up this case of national importance and that the State of New Hampshire will prevail.”

The dispute arises out of a process that began when Massachusetts issued an emergency order retroactively effective March 10, near the beginning of the pandemic. Concerned about losing income tax revenue from the estimated 100,000 New Hampshire residents who before the pandemic commuted to work in Massachusetts, that state issued an emergency tax rule requiring those individuals still employed by Massachusetts companies to continue paying income tax to Massachusetts even though they no longer physically worked there. The temporary rule was subsequently extended indefinitely.

This move angered New Hampshire residents and officials. Unlike its high-tax neighbor to the south, the Granite State has no state income or sales tax as part of an intentional strategy to remain economically competitive with other states.

The lawsuit by New Hampshire was launched “to rectify” Massachusetts’ “unconstitutional, extraterritorial conduct, which ignores deliberate and unique policy choices that are solely New Hampshire’s to make,” according to court papers.

Invoking the high court’s original jurisdiction to adjudicate disputes between the states, the case, New Hampshire v. Massachusetts, court file no. 22O154, was initiated by bill of complaint Oct. 19, but the 14 states did not file friend-of-the-court briefs in support of New Hampshire’s position until this week. Those states are Arkansas, Connecticut, Hawaii, Indiana, Iowa, Kentucky, Louisiana, Missouri, Nebraska, New Jersey, Ohio, Oklahoma, Texas, and Utah.

In the bill of complaint, which the Supreme Court has yet to agree to consider, New Hampshire accuses Massachusetts of “a direct attack on a defining feature of the State of New Hampshire’s sovereignty.”

“For decades, New Hampshire has made the deliberate policy choice to reject a broad-based personal earned income tax or a general sales tax. Not only does New Hampshire sit as an island among the New England States, but this choice differentiates New Hampshire from nearly every other State in the union. Indeed, just one other State—Alaska—has such a tax structure.”

New Hampshire’s policy choice “has resulted in, on average, higher per capita income, lower unemployment, and a competitive edge in attracting new businesses and residents.”

“Through its unprecedented action, Massachusetts has unilaterally imposed an income tax within New Hampshire that New Hampshire, in its sovereign discretion, has deliberately chosen not to impose.”

According to the complaint, Massachusetts adopted a temporary emergency regulation April 21 declaring that nonresident income received for services performed outside Massachusetts would be subject to that state’s income tax. The regulation applied retrospectively starting March 10 but was extended in July and adopted as a final rule effective Oct. 16.

“This extraterritorial assertion of taxing power is unconstitutional,” the complaint states.

Citing both the Commerce Clause and the Due Process Clause of the U.S. Constitution, the Supreme Court “has long recognized that States have limited power to tax nonresidents.”

“By taxing income earned entirely outside of its borders, Massachusetts subjects Granite Staters to simple but unconstitutional confiscation.”

When the bill of complaint was filed, Sununu said he expected New Hampshire to prevail in the Supreme Court.

“Massachusetts cannot balance its budget on the backs of our citizens and punish our workers for working from home to keep themselves, their families, and those around them safe. We are going to fight this unconstitutional attempt to tax our citizens every step of the way, and we are going to win.”

Massachusetts said in a brief in opposition filed by counsel of record, State Solicitor Elizabeth N. Dewar, that her state was not harming the state of New Hampshire, and that any lawsuit should be brought by individual New Hampshire residents, not the state.

Citing existing legal precedents, she argued that, “At bottom, New Hampshire is ‘merely litigating as a volunteer the personal claims of its citizens’ who are employed in Massachusetts … and the claimed ‘threatened invasion’ of its own rights is not ‘of serious magnitude and . . . established by clear and convincing evidence.’”

The Epoch Times reached out to Dewar for a comment on Christmas Eve but was advised she was out of the office.

Attorney Joseph D. Henchman, who filed a friend-of-the-court brief on behalf of the National Taxpayers Union Foundation, Americans for Tax Reform, and 15 other groups, said he was optimistic about the case’s prospects.

Two of the justices, Samuel Alito and Clarence Thomas, “always vote to accept original actions between two states, so we just need three more justices,” Henchman told The Epoch Times in an  email.

“That even New Jersey urged the Court to take the case (and rule for New Hampshire) shows that Massachusetts is out on a limb here.”

It is unclear when the court will take up the case.

“The Court can decide to take the case at any point from now, as all the briefs by everyone have been submitted,” Henchman said.

“The Court usually makes such decisions at their weekly conference meeting between the justices, the next one of which is January 8. But it’s the Supreme Court; a majority of five justices can act on motions at any time.”