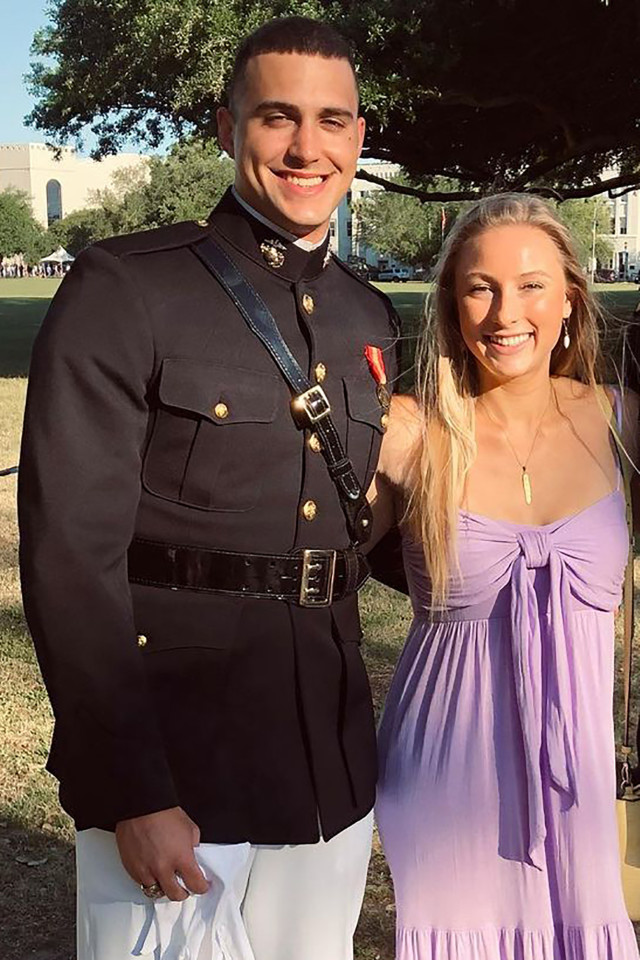 On Sunday, a shooting in Times Square left one person grazed by a ricochet. Samuel Poulin, 21, a new Marine 2LT and recent graduate of The Citadel, was struck by gunfire when he was simply walking through the area with his family. Police stated that he was not the intended target, just an innocent bystander.

Poulin was in New York for the baptism of a family member, according to WNYT. He was with his wife, sister and brother-in-law outside the Marriott Hotel on West 45th Street and Broadway when he was hit by a bullet ricochet just after 5:15 p.m.. A family member plucked the visible bullet out of his back and gave it to police. He is stable and recovering.

The incident is suspected to have occurred from a dispute between two street vendors. Police are searching for two suspects at this time.

He didn’t even look fazed by it when they were wheeling him away on the stretcher. https://t.co/WBnOH76Fmh

Since this is the 2nd shooting in Times Square in two months, Mayor Bill de Blasio said that he would “flood” Times Square with police. The first shooting back in May of 2021 left three people shot, including a 4 year old child. The Mayor’s answer was to put more cops in Times Square. There is a disconnect with reality in the Blue City – the Mayor blames police for everything, defunds them, but then demands their help in a crisis. Gang violence is not addressed by city hall. The NYC Police benevolent Association had this to say:

Every time City Hall says “we’ll flood the zone with cops,” ask yourself: where are these extra cops coming from? Answer: YOUR neighborhood. We’re still down ~2,000 from pre-Defund levels. And hiring is still not catching up to retirements.

New York City has not just defunded police, they banned bail and released criminals back on the streets. And now they wonder what’s going on?

The Gun and Suspect(s)

New York City has some of the most stringent gun control laws in the nation. So where are these criminals getting their weapons? Answer: on the street or stealing. They don’t waltz into a gun store, go through a background check, and walk out with a weapon because they’re “law abiding citizens.” The vendor dispute – was it gang related? It was likely over money, which is a common denominator in that world.

As usual, Democrat Mayoral hopeful Eric Adams focused his response on the gun violence, not on the criminals. No gun control law will save this city – it needs common sense leadership…which it hasn’t had for some time now.

The news of another shooting in Times Square, in broad daylight, is a chilling reminder of the rising threat of gun violence across our city. The spike in victims and incidents are not just statistics on a report; the trauma and bloodshed are real. We cannot have a real economic recovery from COVID-19 if our centers of business and tourism are perceived to be unsafe.

Marine 2nd LT Samuel Poulin was innocently walking down the street. The three victims in May were also innocent bystanders. Times Square is a tourist mecca, but if it remains dangerous, people will stop going. New York has already lost businesses, residents, and police from their foolish Democrat leadership.