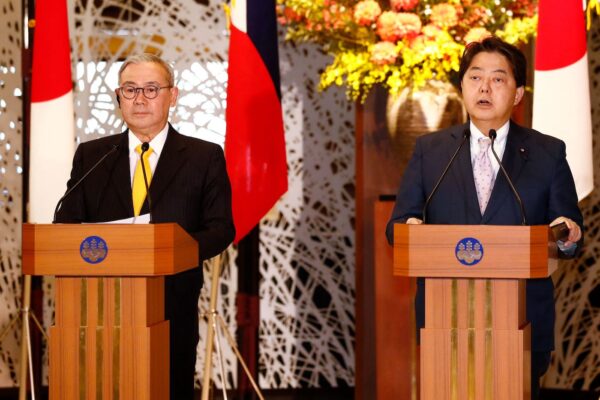 Japan and the Philippines agreed on Saturday to consider facilitating “reciprocal visits” to strengthen defense cooperation amid regional tensions in the South China Sea, where Beijing has increased military activity.

The two countries’ foreign and defense ministers held their first “2+2” security meeting in Tokyo, during which they laid the groundwork for the next decade of their strategic partnership.

Foreign affairs secretary Teodoro Locsin Jr. reaffirmed his country’s commitment to strengthening bilateral cooperation with Japan, which he described as “a reliable partner” of the Philippines.

“We have achieved a substantive clarification of all the issues and in many of them produced consensus. The security ties we are developing are much less than those of an alliance but much more than a cordial relationship,” Locsin said.

Both countries “strongly opposed” actions that would exacerbate tensions in the East and South China Seas, underscoring the need for a rules-based approach to resolving competing claims in maritime areas within the framework of international law.

They called for the implementation of a code of conduct consistent with the Law of the Sea (UNCLOS) without jeopardizing the legitimate rights of all stakeholders in the disputed sea, according to the joint statement.

Prior to the meeting, Philippines President Rodrigo Duterte held an hour-long telephone summit with Chinese leader Xi Jinping on April 8 to discuss the European conflict and the South China Sea, also known as the West Philippine Sea in Manila.

“The leaders stressed the need to exert all efforts to maintain peace, security, and stability in the South China Sea by exercising restraint, dissipating tensions and working on a mutually agreeable framework for functional cooperation,” Duterte’s Presidential Office said in a statement.

It also stated that both sides remained committed to broadening the space for positive engagements even while disputes existed. They also agreed to continue discussions and conclude the code of conduct on the South China Sea.

Beijing claims much of the South China Sea, including the stretch of water in the Philippines’ exclusive economic zone that extends 200 nautical miles from the Philippine coast.

The Permanent Court of Arbitration at The Hague ruled in favor of the Philippines in 2016 but the verdict has had little impact on China’s behavior, with Beijing continuing to pursue its claims to vast swathes of the sea based on its so-called “nine-dash line.”

Duterte said in May last year that the country’s arbitral victory against China’s claims at The Hague was nothing more than just “a piece of paper” that he would throw away in a trash bin due to its futility.

“They filed a case and we won. In real life, between nations, that paper is nothing. If you give it to me, I will tell you ‘[expletive] that is only a paper.’ I will throw that in a wastebasket,” Duterte said in Filipino, CNN Philippines reported.

Aldgra Fredly is a freelance writer based in Malaysia, covering Asia Pacific news for The Epoch Times.