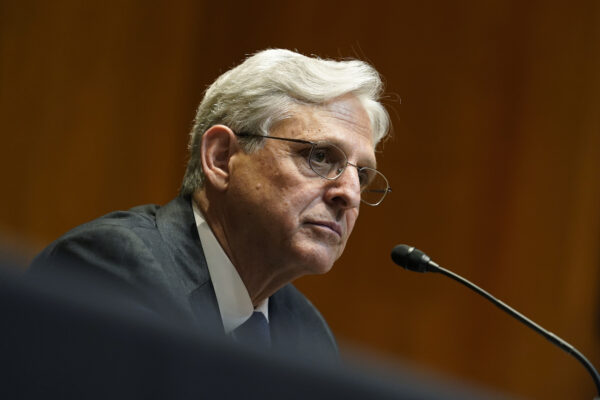 Attorney General Merrick Garland on July 15 overturned an immigration court decision that banned judges from halting the hearing of deportation cases they deem to be low priority.

Thursday’s ruling would allow immigration judges to practise a docket management tool called “administrative closure” to remove cases from their docket without declaring them closed, if deemed appropriate.

Administrative closure does not terminate or dismiss the case, but instead removes it from an immigration judge’s active calendar or from the docket.

Judges were unable to practise administrative closure under former President Donald Trump’s first attorney general, Jeff Sessions, who made a series of changes to the immigration court system that continued under his successor, William Barr.

Sessions said at the time that the practice “lacks a valid legal foundation, and I do not believe it would be appropriate to delegate such authority” to judges because it led to a majority of cases never being resolved.

Garland wrote that other court cases found “that administrative closure is plainly within an immigration judge’s authority under Department of Justice regulations” and said Sessions’s ruling “departed from long-standing practice.”

He went on to note that three federal appeals courts had already rejected Sessions’ 2018 ruling in the Matter of Castro-Tum, saying judges had the authority to decide how they wanted to handle cases.

“It also has served to facilitate the exercise of prosecutorial discretion, allowing government counsel to request that certain low-priority cases be removed from immigration judges’ active calendars or the board’s docket, thereby allowing adjudicators to focus on higher-priority cases,” Garland wrote.

The decision came in the case of a Mexican national whose 2018 motion to administratively close his deportation case so he could seek an unlawful presence waiver was denied in light of Castro-Tum.

Garland reversed that decision and remanded the case for further proceedings.

The Justice Department, which runs the immigration courts, is making rules related to administrative closure and will allow the practice in the meantime, the attorney general added.

“It makes sense in immigration because of the fact that there are certain applications and benefits that people can qualify for that require a preliminary step in by either [US Citizenship and Immigration Services] or sometimes by a state court and that action may determine whether someone is eligible for a benefit before the court,” Marks said.

Garland’s decision comes as the immigration court faces a backlog of 1.3 million cases.

President Biden’s administration is also giving immigration prosecutors more discretion over which cases to pursue or drop and encouraging lawyers to use their discretion “at the earliest point possible.”

In a memo to Immigration and Customs Enforcement (ICE) prosecutors sent earlier this month and obtained by The Hill, the agency’s lawyers are allowed to drop cases against green card holders and those who are elderly, pregnant or have serious health conditions or have been in the U.S. from an early age.

It also advises lawyers to weigh other “compelling humanitarian factors,” like whether a defendant is a caregiver or the victim of a crime.

“Prosecutorial discretion is an indispensable feature of any functioning legal system,” wrote chief ICE attorney John Trasviña in the memo first drafted May 27.

“The exercise of prosecutorial discretion, where appropriate, can preserve limited government resources, achieve just and fair outcomes in individual cases, and advance the department’s mission of administering and enforcing the immigration laws of the United States in a smart and sensible way that promotes public confidence,” he wrote.