Human Trafficking at an All-Time High in the U.S., the #1 Destination in the World for Child Sex Trafficking 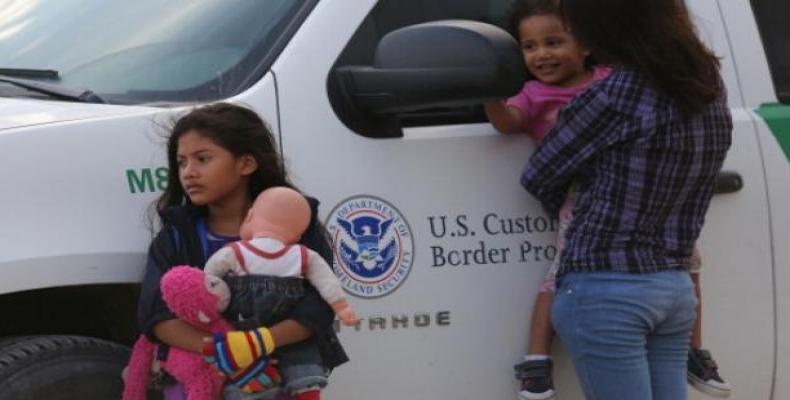 For a number of years now, the United States has had the notorious distinction of being the #1 destination for child sex trafficking, according to the State Department’s own reports. Here is some of our previous coverage on this issue:

But since the Biden Administration has been in office, the volume of human and child trafficking streaming across the U.S.-Mexican border has soared to unprecedented numbers.

Here is a video recently published by someone who lives near the Mexican border in Texas:

People in Texas were horrified earlier this week when an 18-wheeler was stopped and opened, revealing a stack of bodies of people who were being trafficked across the border but died inside the hot truck that had no air conditioning. Nearly 50 people died.

“Stacks Of Bodies”: Horror In Texas As 46 Migrants Found Dead In 18-Wheeler

Officials in San Antonio, Texas found 46 bodies in and around an 18-wheeler tractor-trailer, and 16 others were taken to local hospitals in what is presumed to be human trafficking gone wrong. (Full story.)

And while the flood gates have been opened at the border allowing the smuggling of drugs and weapons, the most lucrative commodity being smuggled across the border, by far, are children.

These children, referred to as unaccompanied minors (UACs), are processed by HHS right into the nation’s lucrative child trafficking network called “foster care.”

During the first few months of the Biden Administration, there were reports that many of these UACs were being placed with foster parents, some of whom went public to report that they were being asked to house up to 26 or more of these UACs. See:

We also reported how the corporations that were being awarded contracts by the new Biden Administration to process these UACs had previous links to child sex abuse.

Child Trafficking Increasing Under Biden? Corporations with History in Child Sex Abuse Vying for Government Contracts to Handle Children Coming Across the Border

But the flow of UACs has become so large now, that the Biden Administration is spending huge amounts of money to house them in groups all across the United States, often spending more money on these UACs than American children who are U.S. citizens and suffering right now due to the economic downturn, and shortages such as infant formulas.

For example, Kristinn Taylor, writing for The Gateway Pundit, reports that the Biden administration has signed a five-year lease to house illegal alien migrant children at the luxurious 100 acre campus of the closed American Hebrew Academy in Greensboro, North Carolina.

The Biden administration has signed a five year lease to house illegal alien migrant children at the luxurious 100 acre campus of the closed American Hebrew Academy in Greensboro, North Carolina. The first children are scheduled to arrive in July. There are reports around 800 staffers will be hired for the facility. The private school academy opened in 2001 and closed in 2019. Tuition and board at the academy was $42,000 per year.

The Academy also has a large indoor swimming pool:

More photos of the campus are archived at Private School Review.

News of the lease was reported earlier this month by WFMY-TV (excerpt):

The American Hebrew Academy will start housing immigrant children at the boarding school campus in July, the Board of Directors announced Friday.

The new leasing deal will give the U.S. Department of Health and Human Services’ (HHS) Administration for Children and Families’ (ACF) Office of Refugee Resettlement (ORR) the campus for use as a transitional space.

The Unaccompanied Children program through ORR provides transitional housing for children who have come across the United border alone. The program then works to place the children with family or provide a “vetted sponsro.”

During their time at the Greensboro site, the federal agency will provide schooling, mental and medical services, case management, legal services, and recreational opportunities.

…The school on the 100-acre campus closed in 2019. It will now be leased to the federal government for five years, during which the American Hebrew Academy will provide educational support.

Up to 800 people will be hired to fulfill functions and provide services at the Hebrew Academy.

Jobs will include administrators, teachers, counselors, medical care professionals, and other workers to oversee the facility and meet the needs of unaccompanied children.

The academy has a particular need for Spanish-speaking workers.

What is seldom, if ever, reported however, is what is going to happen to these children who become part of the nation’s lucrative foster care system.

But we have documented what happens to these children for many years now. This very evil and very corrupt system called foster care, is where most of the nation’s children who are sexually trafficked originate. And it is all supported by taxpayer funds. Here is some of our previous coverage of this issue:

Attorney Reporting in Newsweek: Foster Care is a System Set Up to Sex Traffic American Children

Child Sex Trafficking Through “Child Protection” Services Used by the Rich and Powerful?

And if you are a Christian or Conservative and are tempted to blame this as a “liberal” or “leftist” problem, you are very very wrong.

Christians and Conservatives are just as much to blame for allowing this wicked system called Child Welfare to exist in the United States today by collecting government funds to sponsor foster parents and adoptions, all of which are part of this very evil and corrupt child trafficking network.

And many of those who sexually abuse children are found in Corporate Christianity.

And if you want to read about the depths of the evil and horror that some of these children have to go through, if you can stomach it, read about how their blood is harvested for drugs, or how some babies are groomed from birth to meet the demand of child sex brothels, where they work until their bodies stop functioning, and then they are murdered to harvest their body parts.

I have had to carry the burden of this knowledge for many years now, as it torments my soul to know how we as a nation have allowed this to happen to our children.

And the only thing that keeps me from going completely insane with the knowledge of what these children are suffering, is my faith in a just and holy God who will punish those responsible for these horrible crimes, and also those who allowed them to happen.

What I tell you in the dark, speak in the daylight; what is whispered in your ear, proclaim from the roofs.

While people are saying, “Peace and safety,” destruction will come on them suddenly, as labor pains on a pregnant woman, and they will not escape. (1 Thessalonians 5:3)

God is just: He will pay back trouble to those who trouble you and give relief to you who are troubled, and to us as well.

This will happen when the Lord Jesus is revealed from heaven in blazing fire with his powerful angels. He will punish those who do not know God and do not obey the gospel of our Lord Jesus.

They will be punished with everlasting destruction and shut out from the presence of the Lord and from the majesty of his power. (2 Thessalonians 1:6-9)