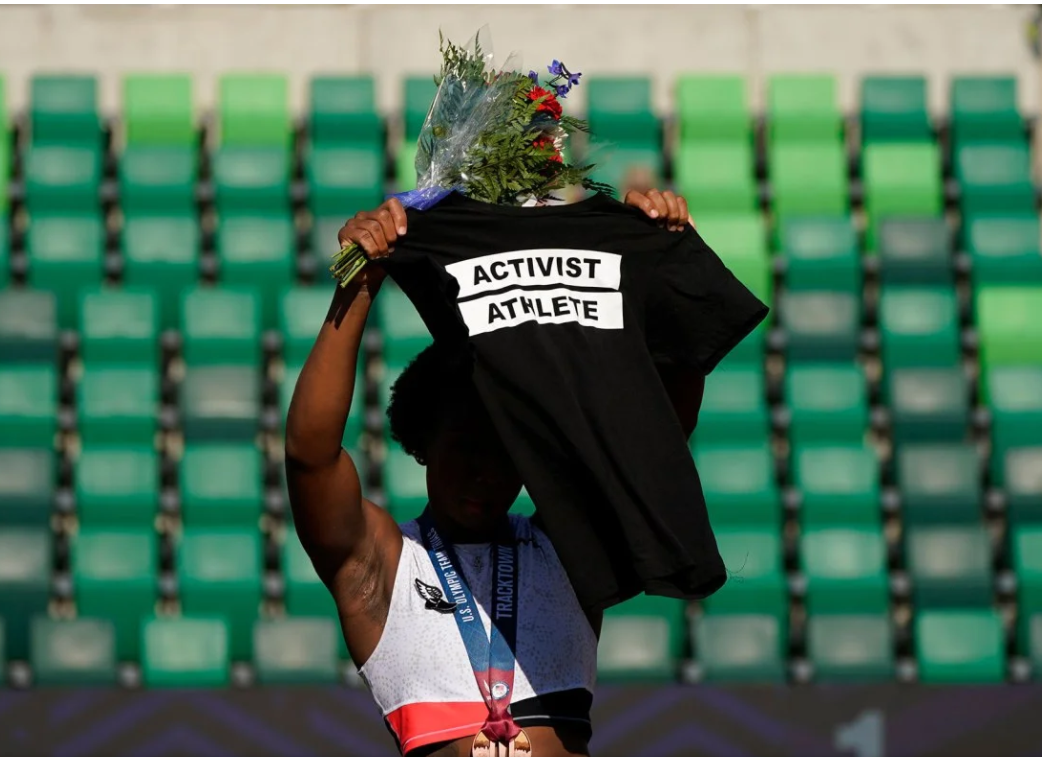 Gwen Berry is a Hammer thrower who came in third place in the Olympic Track and Field trials in Eugene, Oregon over the weekend. She said she was “pissed” that the National Anthem was played as the athletes stood on the podium and turned away from the flag as it was being played. A lot of people were “pissed” at her for disrespecting the flag and being so self-absorbed that she couldn’t be grateful for the opportunities afforded her.

I feel like it was a set-up, and they did it on purpose. I was pissed, to be honest…

They said they were going to play it before we walked out, then they played it when we were out there. But I don’t really want to talk about the anthem because that’s not important. The anthem doesn’t speak for me. It never has…

The playing of the National Anthem was at a set time (5:20 p.m.), not because of any “set up.” Nor was it done to make ungrateful Gwen Berry mad. She has a black t-shirt with the words “Activist Athlete” on it , which is more disgusting than influential. She “felt” disrespected and she is only one person – the millions of people who have died for that flag are far more important than her ungrateful “feelings.

Though it is her right – like ours- to protest, it’s the negative attitude and disrespect for those who died for the flag that is prevalent in her actions. It’s “all about me.” But in real life, it’s not all about her. The Olympic Committee ruled that protests are okay, but it may cut their viewership down. Some on Social Media who responded didn’t appreciate her actions:

“It’s no longer about doing the right thing for “activist athletes”, it’s about drawing attention to themselves. That helps their social media accounts trend which results in more $$ for them. Athletes who disrespect our flag and/or our anthem do not deserve to represent the USA.” Flounder

“We’re going to see more of this. It’s going to make patriotic Americans cheer for foreign competitors and against the anti-American Americans. Hammer thrower Gwen Berry turns away from flag while anthem plays at trials – ‘I feel like it was a set-up’.” Dinesh D’Sousa

I told you there would be more garbage behavior like this. #GwenBerry needs to learn that it’s not about the anthem ‘speaking for her,’ it’s about a moment of gratitude for this country that makes her Olympic dream possible. Shameful self-absorption

Trending: Doctoral Candidate Who Sought to Prove Justice System Is ‘Racist Against Blacks’ Stabbed to Death by Black Male in Chicago (Video)