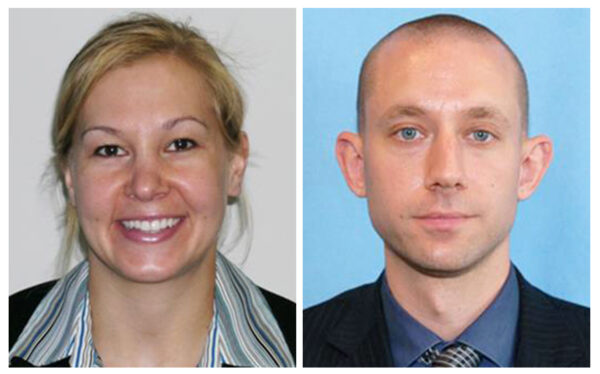 The FBI gathered at the Hard Rock Stadium in Miami Gardens on Sunday to honor Daniel Alfin, the second FBI Special Agent slain while serving a warrant in a child pornography case days earlier.

Family, friends, and fellow FBI agents gathered at around 2 p.m for a memorial service to remember Alfin, who was just 36-years-old when he and agent Laura Schwartzenberger, 43, were gunned down on Feb. 2 while serving a search warrant at the Broward County home of a child pornography suspect.

Three other agents were wounded in the incident, while the gunman, David Lee Huber, 55, killed himself shortly later before he could be arrested.

According to the FBI website, the shootings marked one of the bloodiest days in the agency’s history in South Florida and nationally.

Alfin is survived by a wife and a son.

During his time with the agency, the 36-year-old handled child exploitation cases, as well as cases involving violent crimes against children, court records state. Alfin was born in New York, graduated with a degree in information technology and completed specialized training programs for cybercrimes with the FBI after joining in 2009.

FBI Director Christopher Wray remembered Alfin’s dedication to the law enforcement agency and the work carried out during his time with the FBI.

“Dan’s legacy is one of passion, dedication and principle,” Wray said. “It’s what you imagine when you think of a proud FBI agent who will do anything to catch the bad guy and a devoted father who would do anything for his family.”

“Two best friends who shared the same passion and determination. Despite all that they witnessed in their careers, they had the same sense of optimism and hope that comes from work. They are two of the very best. This is just heartbreaking,” Wray said.

“You knew his brilliance and famously dry humor,” Wray continued. “You loved his tenacity and his heart—one full of passion for fighting for children every single day—and while I didn’t have the privilege of knowing Dan the way you did, what I’ve learned over the past few days is that Dan lived by his sworn oath: He was so proud to have been part of something bigger than himself, just as he always put his family first.”

A 21 gun salute followed Wray’s address, as well as a performance of Amazing Grace and a “Final Radio Call” to acknowledge his passing.

“Special Agent Alfin was a valuable member of the FBI team,” the memorial program said. “He will forever be a hero and we will always honor his ultimate sacrifice.”

Agent Schwartzenberger, a mother-of-two, was memorialized on Saturday.

She joined the FBI in 2005 and two years later, became the first and only female SWAT team member in the agency’s Albuquerque field office. She transferred to Miami to join the violent crimes against children squad in 2010.

”She led a life of sheer determination, dedication and courage,” Wray said. “She was brave in pursuit of criminals … and she relied on her heart and compassion in smaller moments when it was needed the most. She brought light into some of the darkest places.”