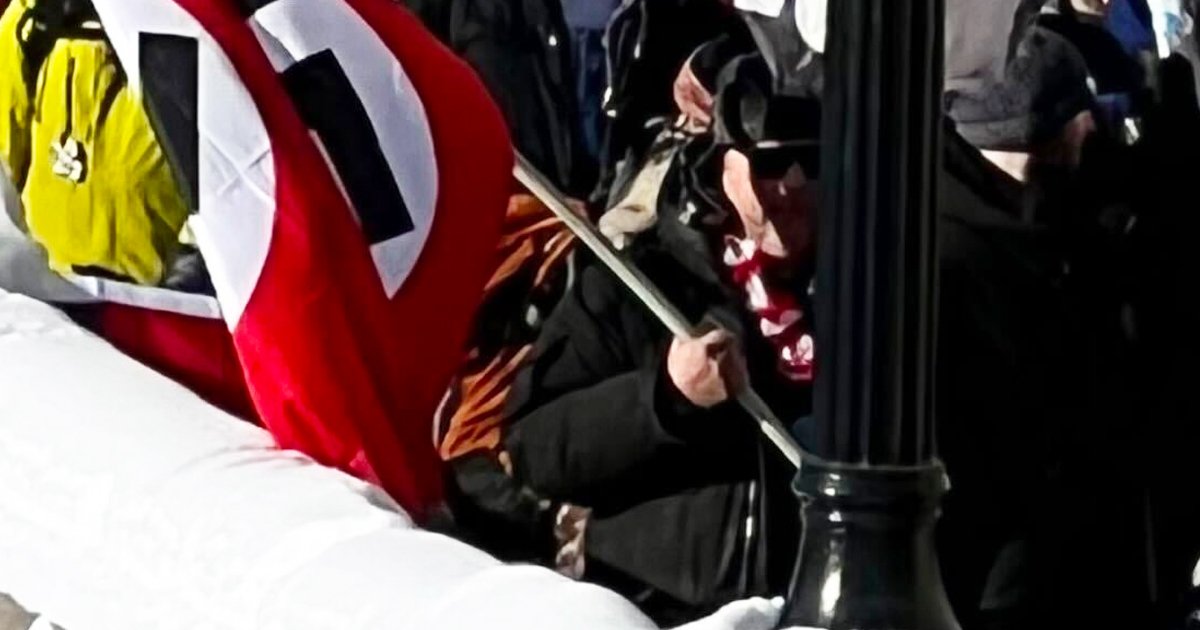 Who is this man? Can you identify him?

The Freedom Convoy has arrived in Ottawa, and their positive and hopeful message has inspired freedom-loving people all over the world.

Unfortunately, much of the legacy media coverage has not focused on the optimistic story about the truckers, the groundswell of support they received and the many communities across Canada who have united and rallied behind their cause. Instead, the media has chosen to focus on two or three men flying egregious flags.

Two or three men flying racist flags should not taint an entire movement.  But actual Nazis should be named, shamed and driven out of the Freedom Convoy movement.  We need to know who these individuals are and why they are trying to harm the reputation of hard-working Canadians using their democratic right to hold a peaceful protest.

I decided to put it to the tens of thousands of independent journalists in Ottawa – the men and women who are present at the Freedom Convoy – to see if anyone could help me identify these individuals.

True North will pay $1,000 to anyone who can help identify the person flying the Nazi flag.

Who is he or she? Where is this photo taken? Are there any other photos, aside from this single shot making the rounds? Pls don’t doxx. DMs are open. Thank you 🙏 pic.twitter.com/cFTA1zcbYW

I woke up this morning to nearly 100 DMs in my Twitter inbox, many from people simply thanking me for trying to get to the bottom of this, truckers telling me they want to see the Nazi flag destroyed as it has nothing to do with their movement, and several more donors pledging thousands more dollars to the pot (It now stands at $6,500) to whoever can successfully identify this Nazi flag guy.

Thanks to dozens of specific and helpful tips, suggestions, ideas, eye-witness accounts and a few new photos, this is what I’ve been able to piece together so far.

Users tell me the original photo was likely taken at Major’s Hill Park, with the backdrop showing the Locks and the Canal in the background. Note that the park is also next to the US Embassy and across the street from Byward Market. There is a large parking lot at the Market and a number of bus routes that lead to Rideau Street and Rideau Centre Mall. The Nazi flag guy could have easily parked or jumped off a bus and been in this location in under a minute.

This looks like it was taken in Majors Hill Park on the other side of the Canal near the Château Laurier away from Parliament Hill. Be skeptical.

Hopefully we’ll find out who they are. pic.twitter.com/MLfHEhjb52

UPDATE: I’ve received more photos, this one appears to be at the Chateau Laurier. Help us identify this individual so we can try to better understand who they are and why they flew this vile flag. The pot is up to $3k thanks to two matching donors. pic.twitter.com/knMuIQblYA

Next, the Nazi flag guy can be seen walking along the terrace of the Fairmont Château Laurier Hotel, which is directly beside Major’s Hill Park. It would have taken less than a minute to walk from the park to this location.

Finally, we have received new footage of Nazi flag guy outside the Château Laurier. This is the clearest, best image of the individual yet.

This was taken as an Apple live photo that has been turned into a video. I’ve also zoomed in so you can see his face. It was taken at 1:57pm local time on Saturday afternoon in Ottawa.

Here is the new live photo of the Nazi flag guy. I put it in a loop. It’s a vile flag. Help us identify him. Please DM me. pic.twitter.com/m8zbUvu49F