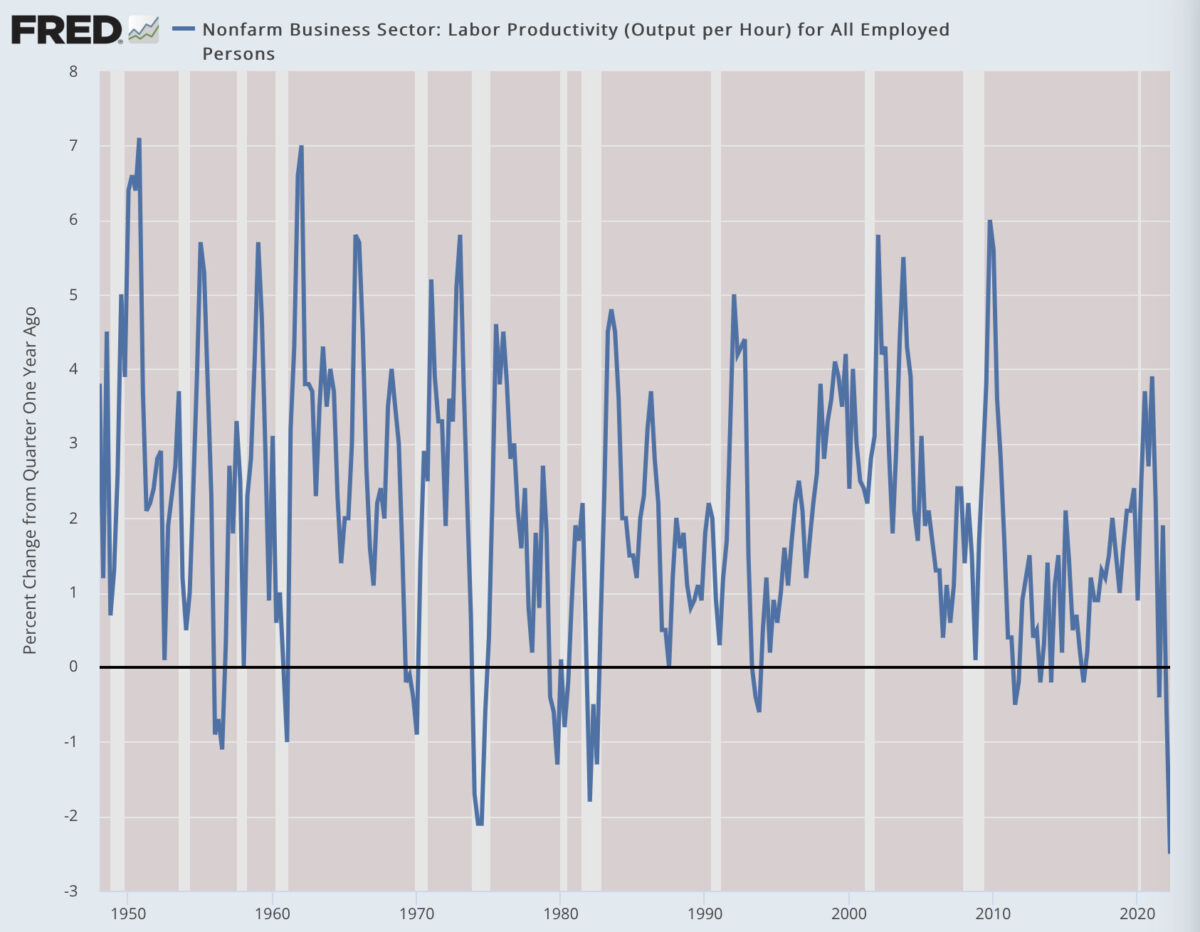 It looks as if we can add another line to the long list of lockdown harms. Sloth.

This explains so much actually. For months, we’ve been watching working/population ratios and labor participation rates and have been stunned by how they both continue to plummet. We search for explanations. Early retirement. Women driven out due to childcare shortages. Unemployment payments.

All these factors contribute but there is still more to explain.

In the midst of the astonishing hullabaloo over the raid of Donald Trump’s home—and the confiscation of a pro-freedom Republican Congressman’s smartphone—the Bureau of Labor Statistics dropped a remarkable report on labor productivity. Here we see something we’ve never seen before.

It’s low and falling. Lower than it has been than in the entire postwar period. It breaks all records. This chart is from 1948 to the present. It adjusts for all factors including participation, population, retirement, and so on. It only looks at hours over output. Here is what we see.

What does this mean?

The immediate response might be that Americans have gotten lazy. They got used to their Zoom lifestyles and pretending to work. They want to hang around on apps, Tweet, chat it up with their friends on Facebook or Slack, and otherwise fake out the boss who can’t fire them anyway for fear of lawsuits. They aren’t doing much anymore, at least not those in high-end employment in professional office suits.

I resisted that conclusion and looked more deeply into how this number is calculated. It looks at total economic output compared to the number of labor hours from wage and salary employees involved in making that output. The result is a figure that estimates productivity per hour. And yes, it is probably widely inaccurate as these sorts of macroeconomic magnitudes tend to be. We use them anyway because they are consistently inaccurate: the same method used to calculate in one quarter is used to calculate in all. It thereby becomes useful.

And what it reveals is probably what we might expect. American workers have dealt with lockdowns and shutdowns, plus vaccine mandate demoralization, plus inflation eating away at real wages, plus an existing or impending recession, and you have the result. A nation of goof-offs.

It might be more than that. Lockdowns kicked off a national substance-abuse crisis: liquor, drugs, weed, you name it. And depression too. Even today, one cannot help but notice the smell of weed in large cities. This is not the smell of ambition and productivity.

We can combine this with the sheer number of people who have left the workforce completely and you paint a grim picture.

Economist and Brownstone senior fellow David Stockman has an interesting take on this. Rather than just fire people outright, companies are keeping unproductive employees on the payroll just in case. He writes:

“Today’s Q2 productivity report … came in at -4.7 percent, on top of the -7.7 percent decline posted in Q1. Together they amount to the worst back-to-back productivity declines ever reported.

“Our point is that this development puts a whole new angle on the so-called ‘strong’ labor market. To wit, owing to the labor market turmoil and disruptions of the Covid-Lockdowns and massive stimmy injections since 2020, employers are apparently hiring on a just-in-case basis like rarely before. This is otherwise known as top-of-the-cycle labor hoarding.

“As shown below, since Q4 2021 economic output, which is a close derivative of real GDP, has shrunk by –1.2 percent. By contrast, the US nonfarm payroll has increased by 2.77 million jobs or nearly +2.0 percent.

“Needless to say, with far more labor spread over contracting output, labor productivity took it on the chin. That is to say, bad Washington policies including $6 trillion of stimmies, massive money-pumping and the brutal Lockdowns of the Virus Patrol have apparently left employers dazed and confused.

“At length, however, employers will wake-up to the fact that bloated payrolls against declining sales will result in a severe profit margin squeeze. Then the labor-shedding and layoffs will commence big time, even as the Keynesians in the Eccles Building are reduced to babbling about the ‘strong’ labor market which suddenly vanished.”

What he is getting at is what I’ve called (after Keynes) the coming euthanasia of the overclass. It won’t be the people actually doing real stuff who will face layoffs but the Zoom workers who stayed home because government said they could and their employers could not object. Employees gradually discovered that they could be anywhere—at the pool, in bed, on the road, climbing mountains—and so long as they had a Slack app running, no one could tell.

Lockdowns acculturated an entire generation to believe that work is fake, productivity is a ruse, money comes for nothing, the boss is an idiot, and many workers are privileged to be wealthy forever due to papers handed out for $200,000 by colleges and universities. Who needs productivity, much less ambition?

In the old days, in an ethos formed from bourgeois experience over hundreds of years, the idea of working and doing one’s part was ingrained as a moral habit, part of the liturgy of life itself. When the government told everyone to stop in the name of virus control, something went haywire in people’s brains. If governments say that the work ethic amounts to nothing but pathogenic spread, and we can all contribute more by staying home and doing less, it’s hard to go back. It wrecked a generation. We are paying the price now.

The good news for the productive few is that this means higher wages and job opportunities galore, especially if you have actual skill and a desire to work. The bad news for everyone else is that many companies will soon discover that you are useless. That’s when the unemployment numbers will start ticking up, making this recession look more like ones in the past except for the relentless decline in real wages.

To answer the question about whether Americans have become lazy bums, the answer is many but not all. It’s sector specific. And individual specific.

From the Brownstone Institute

Jeffrey A. Tucker is the founder and president of the Brownstone Institute, and the author of many thousands of articles in the scholarly and popular press, as well as 10 books in five languages, most recently “Liberty or Lockdown.” He is also the editor of The Best of Mises. He writes a daily column on economics for The Epoch Times and speaks widely on the topics of economics, technology, social philosophy, and culture.