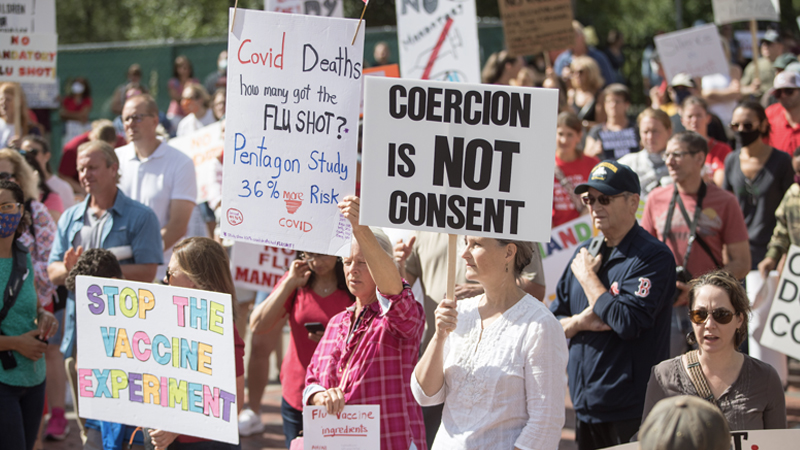 Every Democrat on the House Judiciary Committee voted down a proposal prohibiting intelligences agencies from spying on or prosecuting Americans who refused to take the experimental COVID injection.

Rep. Andy Biggs (R-Ariz.) introduced an amendment to H.R. 350 that would prevent such investigations against unvaccinated Americans, who have the right to refuse medical treatments they think is unnecessary or unsafe.

“None of the funds authorized to be appropriated in this Act shall be used to monitor, analyze, investigate or prosecute any individual solely because that individuals declined the administration of a vaccine to COVID-19 or expressed opposition to such administration,” read the proposed amendment.

But every Democrat voted against the amendment, according to Rep. Thomas Massie (R-Ky.).

“This amendment is germane to the bill because the FBI has already indicated that your opposition to taking the vaccine, or just spreading information that might be true but the CDC doesn’t agree with, will qualify you to be targeted as a possible ‘domestic terrorist’,” Massie told the committee on Wednesday.

Release the warrior in you by capitalizing on hot deals you won’t find anywhere else!

“Does that make that mom a domestic terrorist? It’s ridiculous,” Massie added.

The DHS released a memo in February vowing to target “extremist” Americans who spread “conspiracy theories” about the COVID injection, the lockdowns, or other issues that question the establishment’s COVID narrative.

“There is widespread online proliferation of false or misleading narratives regarding unsubstantiated widespread election fraud and COVID-19. Grievances associated with these themes inspired violent extremist attacks during 2021,” claimed the agency.

“COVID-19 mitigation measures—particularly COVID-19 vaccine and mask mandates—have been used by domestic violent extremists to justify violence since 2020 and could continue to inspire these extremists to target government, healthcare, and academic institutions that they associate with those measures.”

Since the introduction of the dangerous COVID injections, the Democrats and the media have been fervently trying to shame and punish the unvaccinated with radical policies.

For example, one Democrats proposed a bill last December to force unvaccinated Americans to pay for COVID patients’ medical expenses.

Now, Biden’s DHS is gearing up to classify individuals who question the COVID vaccine as “domestic extremists” and Democrats are perfectly happy to ignore the unconstitutionality of a such an authoritarian measure.